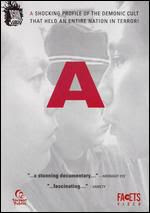 On March 20th, 1995 Japan suffered its worst case of domestic terrorism when sarin gas was released into five lines of the Tokyo subway system killing 12 people, severely injuring 54 and affecting between 1,000 to 4,000 more. It was soon discovered that the Aum Shinrikyo cult was behind the attacks. Founded in 1984 in a one room apartment in Shibuya by Shoko Asahara the cult espoused the virtues of meditation and due to a massive PR push during the late 80’s and early 90’s it had actually become the fastest growing religion in Japan. During the months that followed the gas attacks the cult’s compounds were raided, 150 cult members were arrested including Asahara himself, and authorities found damning evidence that there was more on the minds of Asahara and the senior members of Aum than meditation; explosives, chemical and biological weapons, firearms, and even a Russian military helicopter were found behind the walls of Aum’s compounds. That was almost 13 years ago and many of the Aum members behind the attacks have been sentenced to death, but they still remain silent as to the reasons why they happened in the first place. In the year after the attacks documentary filmmaker Tatsuya Mori was given unprecedented access to members of Aum Shinrikyo, filming them within their compound as he tries to get to the bottom of that very question: why?

Starting a year after the attacks as Aum Shinrikyo is filing for bankruptcy Mori’s camera follows a handful of faithful, full-time Aum Shinrikyo members still living cloistered lives: chanting, meditating and subsisting on a simple vegetarian diet while outside the angry public have plastered anti-Aum banners around their compound and camera crews from every major Japanese television network have camped themselves out at the curb. Beyond the daily rigors of a monastic life, though, the members spend hours glued to banks of television sets seemingly watching every bit of news about their imprisoned colleagues and listening to taped speeches given by their blind leader, Asahara. At the center of all this is Hiroshi Araki, a quiet, bespectacled 28-year-old Aum member who has been appointed as the cult’s public relations representative. It’s his job to field the numerous phone calls and faxes requesting permission for interviews, apologies, anything, so you would think that it would be from Araki that we might get an idea as to why Aum unleashed such destruction upon an innocent population. No such luck. 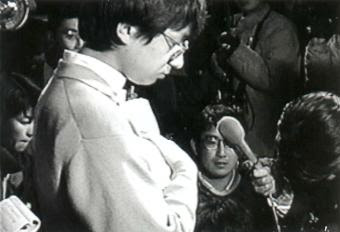 Through most of the film Araki and his fellow Aum members are evasive, vague, coy, and absolutely frustrating. Discussions with the media end with Araki leading them into mazes of bureaucratic babble and interviews with other Aum members conducted by Mori regarding the finer points of Aum Shinrikyo doctrine often end with the followers mumbling something about how it is not something a normal person could understand before they lapse into silence. Half way through the film all I wanted to do was punch them, but after an incident involving a plain clothed policemen falsely accusing an Aum member of resisting arrest and assault on a police officer the tone of “A” began to change.

Over time the Aum followers, specifically Araki, begin to open up to Mori and we start to see just how lost this whole series of events have left them. Shuffled from expansive compounds to cramped apartments, with their leader in prison and his two toddler aged children appointed leaders of the cult the devotees simply aren’t equipped to discuss anything of importance because, I believe, they don’t have someone telling them what to say, know, or believe. You can see it in Araki’s eyes at the end of the film when he finally returns to his estranged family for a visit: he doesn’t know why Aum committed these crimes anymore than anyone else does, but as we come to view the vacuum that Asahara created in his followers “A” gives us more than an inkling as to “how” he might have got them to commit them.
Posted by Chris MaGee at 4:29 AM