All 28 "Godzilla" films gets refurbished for run on Japanese TV 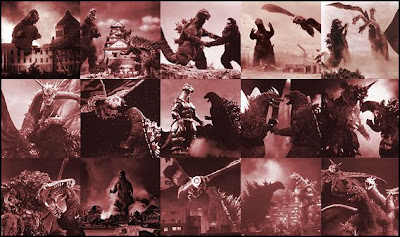 I know that Jason Gray is a fellow Toronto boy, so he like myself and so many of you out there in your mid-30s will remember how WUTV Buffalo used to play the old "Godzilla" films as well as other kaiju films almost daily after school and in the afternoons on weekends. For a whole generation of Torontonions this was our first exposure to Japanese cinema, even if we didn't know it at the time.

Well, now Jason and any other expat Torontonions living in Japan will get to relive their childhoods by getting a chance to see refurbished, hi-def broadcasts of all 28 of the "Godzilla" films as part the 10th anniversary of the Nihon Eiga Senmon Channel. Apparently they started airing on October 25th and will continue for the next three months.

Even though I've moved on to being a fan of Ozu, Mizoguchi, Naruse, etc. I do have to say that the idea getting to see all those cheesy "Godzilla" films again gets me a bit giddy. Not living in Japan I may have to max out my Zip.ca membership and recreate my own "Godzilla" marathon at home.

Check out the official site for the Nihon Eiga Senmon Channel Godzilla-thon here, and once again thanks to Jason Gray for the story.
Posted by Chris MaGee at 4:26 AM