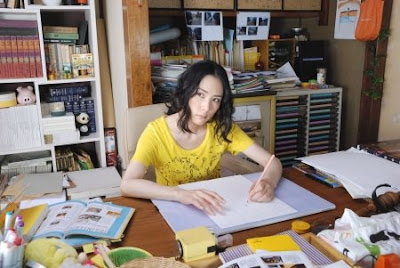 A creatively blocked manga artist who spends their time swilling beer, taking solace in long baths and naps and who goes days without shaving... her legs. We've had more than our share of failed male writers onscreen, from Spike Jonze's "Adaptation" to Curtis Hanson's "Wonder Boys", but now it's time to let the women have a go at a good wallow.

That's exactly what director Toshiyuki Morioka has done with his upcoming film "Onnanoko Monogatari (Girl's Story)". Based on the manga by Rieko Saibara it follows a female mangaka attempting to pull herself out of a serious career slump. Far from having been in a career slump herself popular supporting actress Eri Fukatsu (The Magic Hour, Bayside Shakedown) will get her chance in a lead role as the disgruntled artist.

Although "Onnanoko Monogatari" has apparently already been completed Japanese audiences will have to wait until fall 2009 before they'll get a chance to see it. As for us North Americans... your gues is as good as mine.

Thanks to Tokyograph for the story.
Posted by Chris MaGee at 5:05 AM