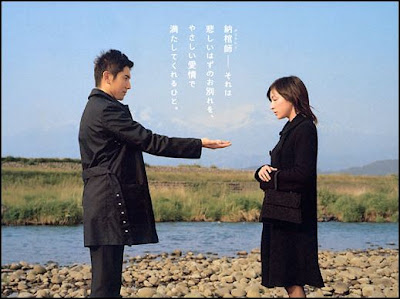 Tokyograph is reporting that Yojiro Takita's "Okuribito (Departures)" has picked up both Best Picture and Best Director awards at the 30th annual Yokohama Eigasai (Film Festival). This is yet another feather in the cap of the drama about an unemployed cellist (Masahiro Motoki) who returns to his hometwon to take a job at a funeral home. "Okuribito has already taken home Best Picture at this year's Montreal World Film Festival and has been slected to represent Japan in the Best Foreign Language Film race at the upcoming Academy Awards.

Besides "Okuribito" the big winners were actors who starred in films centering around caoital punishment, namely Kaoru Kobayashi who won best actor for his role as a prison guard who accompanies a death row prisoner to the gallows in "Kyuuka (Vacation)" and Best Actress went to Eiko Koike for her role in the film "Seppun (Kiss)" about a woman who befriends a death row inmate and then begins a relationship with his lawyer.

The Yokohama Eigasai also announced its picks for the top ten best Japanese films of 2008. They are:

I'm so happy to see that Ryosuke Hashiguchi's wonderful "All Around Us" made it to number two on the list. It's probably my favorite film of 2008.
Posted by Chris MaGee at 4:33 PM