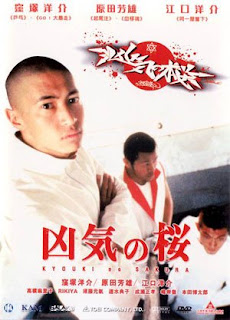 You’ll see them in many of Japan’s large cities: black vans decked with the Imperial flag and bristling with speakers that blast out pro-military, anti-foreign diatribes. This is the street level presence of the ultra-right wing in Japan. Advocating a return to the military aggression that brought Japan into WWII and holding revisionist views of the atrocities of the Imperial Army during that period their influence extends from the back rooms of power all the way down to the criminal underworld, and that is where we start Kenji Sonoda’s 2002 film “Kyouki no Sakura (Madness in Bloom), the title of which is a play on words between madness and chivalry in Japanese.

Yamaguchi (Yôsuke Kubozuka in another fantastic performance) and his two buddies are the equivalent of neo-Nazi skinheads; heads shaved, dressed entirely in white uniforms embroidered with the Hinomaru (red sun disk) and samurai symbols they stroll the streets of Shibuya preying on other street gangs who they see as “destroying Japan”. As we watch them bare knuckle it with these other gangs we quickly realize that their “ideology” is the only thing separating these thugs from all the other thugs that they leave bloody and broken on the pavement; and we’re treated to scene after rap-fueled scene of this violence for the first 20 minutes of the film. Intercut with this we witness contract killer, Saburo as he breaks into a woman’s home, beats her to death and ends up disposing her body in a car wreaking yard. Ah, yes… more violence towards women (insert bitter sarcasm here). You can’t have a Japanese crime movie without it it seems. Going between Yamaguchi and Saburo I wondered what the connection was and when exactly the plot was going to kick in, but when it finally does “Kyouki no Sakura” turns into a fairly passable entertainment with some beautiful camera work, but some ugly politics. 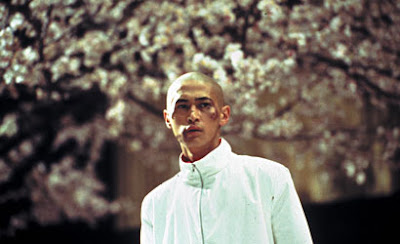 Yamaguchi’s gang comes to the attention of a right wing yakuza gang headed by Aota (Yoshio Harada), a man who spends most of his time tending his immaculate Japanese garden while musing about how Japan has lost its soul to foreign influence. Aota takes Yamaguchi under his wing while Yamaguchi’s two remaining buddies get drawn into a war brewing within the gang spearheaded by Aota’s second in command and that mysterious contract killer from the start of the film, Saburo. Of course double crossing and disaster follows, but I don’t want to give too much away… Well, that and like a lot of people who’ve attempted to review “Kyouki no Sakura” have noted the subtitles of the Hong Kong disk are terrible, so bring your beginners Japanese and a smart eye to your viewing of this.

What transcends language though is the wonderful kinetic camera work on display. For sheer creativity and brutality I couldn’t help but think of the classic yakuza pictures of Kinji Fukasaku and how he would often take cameras into the street and shoot sequences guerrilla-style. Plus the criminal underdog who slowly climbs the ranks of the yakuza is a huge echo of Fukasaku’s oeuvre. So with its fantastic look, it’s all star cast who all give top notch performances why have we not seen a region 1 release of this film? Here are those ugly politics again. I doubt that a North American distributor would be willing to release a film about ultra-right wing street thugs unless, like in Tony Kaye’s “American History X” they eventually repent, which Yamaguchi and his gang never, ever do. Too bad…
Posted by Chris MaGee at 4:30 PM

Do you know where I can watch this film?