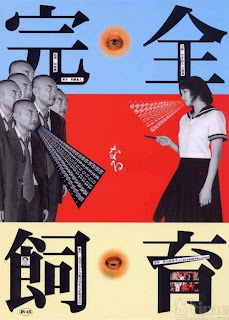 In my humble opinion, all good art should invoke a reaction from the viewer. And film can be an art. Or it can be masked as an art. But either way, a film has to draw a reaction from you, the viewer, regardless of its outcome. If something that is pure expression or pure entertainment fails to move you, in anyway, shape or form, how can it not be deemed a failure? And how does this relate to "The Perfect Education"? Well, I’ll tell you.

Imprisonment, bondage, sexual slavery; all themes well explored in many Japanese art forms, including film. The classic "Moju (aka Blind Beast)", the S&M series "Flower and Snake", "A Wife to be Sacrificed", the "Guinea Pig" series, or a slew of other Roman Porno, pinku eiga and soft core pornographic films. These films are cheap to make, relying typical on one main location and using only a few actors. There subject matter was typically divisive, whether it’s more artistic like Nagisa Oshima or subtle exploitation like Takashi Ishii and his version of the "Flower and Snake" series. But in the end, regardless of what they made, their films always drew a reaction. You may be disgusted with "Wife to be Sacrificed", but the point is, at least you felt something.

"The Perfect Education" starts off as any good imprisonment drama should. 18 year old Kuniko (Hijiri Kojima) is abducted while jogging. She’s tied up and held prisoner by middle aged salary man Iwazono (Naoto Takenaka). However, instead of forcing himself on her, he tries to create the perfect union between the two of them by being nice to her and caring for her. They eat breakfast and have pleasant discussions. Even when she forces herself on him, in an effort to end the suffering so that he’ll let her go, Iwazono remains steadfast in his resolve and keeps her at bay. And while resistant at first, a strange bond quickly forms between prisoner and slave master, and they soon become dependant on one another. Iwazono leaves her on her own, only to watch her for hours from a building across the street. And while this game is played out between high school girl and middle aged salary man, the residents of the apartment building are oblivious. The next door neighbour is a porn addict. The salary man downstairs is a cross-dressing pansy. They’re all misfits, much like Iwazono.

I’m sure you can imagine where the film ends up going. The ‘perfect sex’ is ultimately the point, but it’s the screenplay, written by veteran Kaneto Shindo of "Onibaba" fame, that takes a strange way of getting there. It switches quickly from a dramatic S&M film to a romantic comedy, with almost no motivation or logic as to why Kuniko becomes receptive to Iwazono’s manipulations. And that’s where the film plays out, as a weird, sometimes humourous, mostly ambiguous tale of one man’s quest for perfect love. And that’s also why it fails. While it could have easily descended into excess and depravity like so many films do these days, "The Perfect Education" doesn’t. And while that’s refreshing, it’s also strangely muted and dull. It doesn’t reach far enough in any one direction to have a clear impact; instead it scrambles at several various points, never quite reaching any. It’s not edgy or funny enough to be a satire (although if it was a satire, I think it would have been great), and it’s mostly Shinya Tsukamoto’s performance as the cross dressing salary man who lives down stairs that brings the chief source of laughter. The film isn’t particularly erotic either. Ben Wada is no Nagisa Oshima. This is sex is good clean fun, and doesn’t serve any purpose beyond that. It just sort of happens, and you’re numb to most of it. Really, the film just exists as a strange exercise in genre bending, albeit an unsuccessful one.

Read more by Matthew Hardstaff at his blog.
Posted by Chris MaGee at 3:56 PM