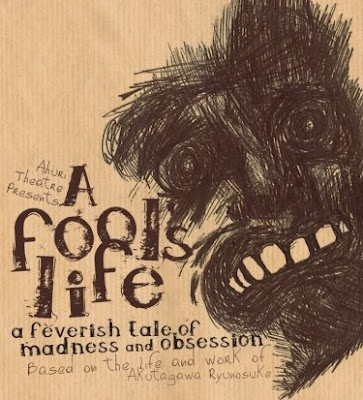 That headline doesn't sound right. It makes you think that the Ahuri Theatre Company will be bringing the author of "Rashomon" and "In a Grove" to the Toronto offices of the Japan Foundation, which would be impossible as he died in 1927. No the Toronto/ Montreal/ Tokyo-based Ahuri Theatre are bringing their work-in-progress production "A Fool's Life" which they describe as "a feverish tale of madness and obsession" based on the life and work of Akutagawa, one of the most famed authors in Japanese literature, to the Japan Foundation Toronto (131 Bloor Street West, 2nd Floor) this Friday and Saturday.Director Dan Watson and cast have created a very ambitious project combining elements of noh, kabuki and bunraku puppetry with the spoken languages of the various actors in the Company on a set made entirely of paper. It's definitely got the attention of people here in the city because both performances on January 30th and January 31st (both at 7:00 p.m.) are fully booked, but thankfully the folks at the Japan Foundation have added a Saturday, January 31st matinee at 2:00 p.m.