REVIEW: Ashita no Joe: The Movie 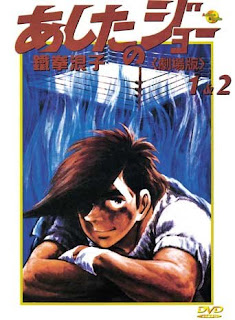 Many comic book characters (Batman, Superman, Spiderman) have easily become childhood heroes to kids around the world, but how many comic book characters could lay claim to having started a revolution. That's what happened on March 31st, 1970 when nine members of the Japanese Communist League-Red Army Faction hijacked a Japan Airlines Boeing 727 at Tokyo International Airport and flew it to Gimpo Airport in Seoul, South Korea. It was there they released all 129 passengers and then proceeded to their final destination, North Korea. When the group released a statement it consisted of only one sentence: "We are Tomorrow's Joes!" The "Tomorrow's Joes" that the hijackers were referring to was Joe Yabuki, the title character of Weekly Shōnen Magazine's serialized boxing manga "Ashita no Joe".

Created by Tetsuya Chiba the manga followed the rise of of Joe from being a hot-headed street kid to a champion bantam weight boxer under the tutelage of an alcoholic coach named Danpei. From the moment that "Ashita no Joe" appeared in January of 1968 this single-minded fighter from the poor part of town was embraced as a kindred spirit by the then burdgeoning radical student movement popping up on university campuses across Japan. "In the right hand we have Asahi Journal [a weekly news magazine], in the left hand we have Shōnen Magazine" was the catch phrase published in 1970 in a Waseda University campus paper. Throughout its 5 year run Japanese authorities and censors kept a close eye on "Ashita no Joe" and it was in 1973 after the manga was branded as being "indecent" that Chiba had to quickly bring the story of Joe to an end.

That wasn't the end of Joe's fight or popularity though. The first half of the saga of Joe Yabuki was turned into an animated series that ran on Fuji TV between April of 1970 and September of 1971, but in 1980 just before the second half of the "Ashita no Joe" story was to premiere on Japanese TV original series director Osamu Dezaki edited portions of the '70-'71 series into a 150-minute movie to reacquaint audiences with all that had happened thus far. It's also a great primer for anyone who wants a crash course in this manga icon. 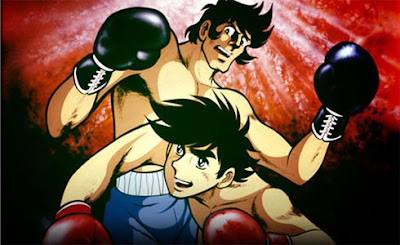 "Ashita no Joe: The Movie" starts in the rough back streets of Asakusa where former boxer and coach Denpei, out on one of his usual booze-fueled tears, has a chance meeting with a young street orphan named Joe. When Joe challenges the old man to a fight Denpei is immediately impressed by the boy's strength and skill. This is a great boxer in the raw, but Denpei just can't convince this kid that he's got a future using his fists. Joe lives in the moment without a thought given to propriety or authority. He's basically a dumb kid, but it's easy to see that his devil may care attitude striking a chord with Japanese youth used to nothing but propriety and authority. One minute he's happily whistling a tune to himself, the next he's taking on a gang of thugs... and laughing while he does it. It takes a run in with the law and a stint in a juvenile reform school before Joe starts heeding Denpei's advice.

It's while inside that Joe starts receiving notes from Denpei on proper boxing technique and with the hoodlums inside Joe quickly puts them to use; but it isn't until he meets Tōru Rikiishi, a hulking young boxer sent to reform school after attacking a heckler that Joe really starts to take this new path seriously. What starts out as burning hatred inside the reform school turns into grudging respect and admiration outside where Denpei finally has a chance to train Joe for a career in boxing. The lead up to the final battle with Rikiishi, though, is marked by grueling days and weeks for both fighters, especially Rikiishi who must nearly starve himself to go down three weight levels to qualify to fight Joe. The film itself is also a bit grueling, suffering from inconsistent plot pacing and animation quality. If you consider that the original series stretched for over 33 hours you can see why, but thankfully the final match between Joe and Rikiishi is monumental stuff and wonderfully rendered with expressive lines and colours that pop off the screen.

The reaction to that fight as depicted in the original manga was equally monumental... but here I'll give a warning for SPOILERS... In March 1970, after readers saw Rikiishi die from a combination of Joe's pummeling and sheer exhaustion a real-life funeral officiated by Buddhist priests was held. Avant-garde playwright and filmmaker Shuji Terayama organized the event in a boxing ring and it was attended by over 700 mourners. A fitting end to a worthy rival and yet another anecdote that proves just how influential "Ashita no Joe" was to a whole generation of youth.
Posted by Chris MaGee at 3:03 PM