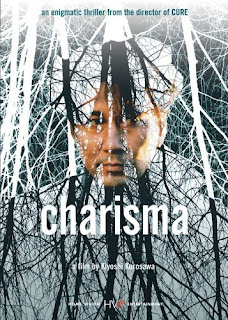 It’s highly doubtful that Kiyoshi Kurosawa would be who he is today without Robert Redford and his Sundance Film Institute. While cutting his teeth in the V-Cinema trenches in the 80’s and early 90’s Kurosawa still had enough time to pound out a script about a police officer and a half dead tree named Charisma. Strange, apocalyptic and heavily symbolic it had all the hallmarks of the now familiar Kurosawa style, a style that was creeping into the V-Cinema money makers he was churning out for Nikkatsu which made the execs none to happy. While they threatened to blacklist the director this early draft of “Charisma” got the attention of the folks at Sundance and Kurosawa was invited to take part in their screenplay workshop. For a filmmaker who has never been shy about admitting his admiration of American cinema, especially the films of Don Siegel, Robert Aldrich and even Clint Eastwood, it was a chance he couldn’t pass up. With the help of the festival Kurosawa spent several more years fine tuning the script. Jump ahead to 1999 and with the attention from Sundance and the success of Kurosawa’s 1997 film “Cure” Nikkatsu looked upon their former bad boy with much kinder eyes and actually agreed to co-finance the film’s production. 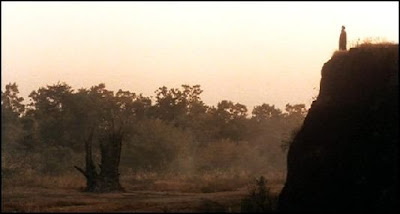 Koji Yakusho stars as Yabuike, a police office close to burnout. Called into help negotiate the hostage taking of a parliament member Yabuike is handed what he thinks is a list of demands by the captor. Instead it’s just a slip of paper that reads “Restore the rules of the world”. Minutes later the hostage taking ends in gunfire, the MP and his captor dead on the floor and Yabuike is ordered to take a leave of absence. Yabuike is so shaken by this event that all he can do is to be asked to be driven somewhere, anywhere and eventually he gets himself lost in a dying forest. The local forestry workers headed up by Nakasone (Ren Osugi) and a botanist, Mitsuko Jinbo (Jun Fubuki) are convinced that the blight is being caused by a single tree that was imported from continental Asia by the deceased director of a local mental asylum. They can’t do anything about the threat this tree poses though because it’s being protected by Kiriyama (Hiroyuki Ikeuchi), a former patient at the asylum. In the same way that that other, more famous Kurosawa (Akira), sent a masterless samurai into gang war in a small town in his film “Yojimbo”, Yakusho’s character never truly picks a side; instead he takes counsel from Jinbo about the dangers of the tree, then he helps Kiriyama in tending to it. What is more important, Yabuike is left to ask himself, this one tree or the fate of the entire forest?

Kiyoshi Kurosawa’s films have always been difficult to classify and “Charisma” is probably one of the most difficult. Those expecting a J-horror film will be terribly, terribly disappointed and anyone looking for easy interpretation like with his films “Kairo” (the de-humanizing effect of internet technology) or “Bright Future” (the gap between the older generation and today’s potentially poisonous youth) will feel like they’re being lead deeper and deeper into a metaphorical maze. I’ve read many different interpretations of “Charisma”; from it being a critique of Japan’s social structure to the environmental (even that it’s a loose adaptation of “Princess Mononoke”!!!), but for me pat interpretation takes all the mystery out of a work of art, and thus the fun. If you go into “Charisma” as if you were going to experience a fascinating and harrowing dream then I think you’ll be infinitely rewarded, but if you want scares or easy symbolism then you might want to stay away.