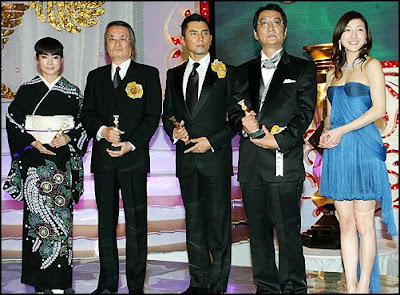 Okay, was there every really any doubt? Yojiro Takita's "Departures (Okuribito)" seems to have been an unstoppable force not only at the Japanese box office, but at film festivals and awards ceremonies both in Japan and around the world, so when the film swept last night's 32nd Annual Japanese Academy Awards there were few who were surprised. The film that chronicles the return of an unemployed cellist to his hometown were he starts over by working at a funeral home picked up awards for Best Film, Best Director for Yojiro Takita (above, second from right), Best Actor for Masahiro Motoki (above center), Best Screenplay, Best Supporting Actor for Tsutomu Yamazaki (above, second from left), and Best Supporting Actress for Kimiko Yo (above, far left) along with four other honours. (Motoki, Yamazaki and Yo were joined by co-star Ryoko Hirosue on the far right.) Takita and "Departures" producers at Shochiku can add all those awards the film's trophy case which already includes Best Film wins from the Kinema Junpo Awards, the Hochi Film Awards, the Mainichi Film Concours, the Yokohama Eigasai, and the Montreal World Film Festival. Now the question remains as to whether this amazing winning streak will follow the film to Los Angeles for tomorrow's Academy Awards ceremonies where "Departures" will be going up against Laurent Cantet's "The Class", Uli Edel's "The Baader Meinhof Complex", Götz Spielmann's "Revanche" and Ari Folman's "Waltz with Bashir" in the Best Foreign Language Film category.

It wasn't just all "Departures" at last night's ceremony held at Tokyo's Grand Prince Hotel New Takanawa though. The Best Actress win for Tae Kimura for her role in Ryosuke Hashiguchi's "All Around Us" was a surprise with many predicting that the award would go to veteran actress Sayuri Yoshinaga for her role in Yoji Yamada's "Kabei: Our Mother". Frankly, I couldn't be happier about this. Kimura was a revelation as a young wife suffering from crippling depression after the death of her baby. It was also great to see Ken'ichi Matsuyama picking up the people's choice Topical Award for Best Actor for his hilarious split personality performance in Toshio Lee's big screen manga adaptation "Detroit Metal City".

Check out all the winners below courtesy of Jason Gray and Screen Daily:

Best Actress: Tae Kimura (All Around Us)

Best Animated Film: Ponyo On The Cliff By The Sea

Best Music: Ponyo On The Cliff By The Sea

Thanks to Nikkan Sports for the above pic.
Posted by Chris MaGee at 8:51 AM