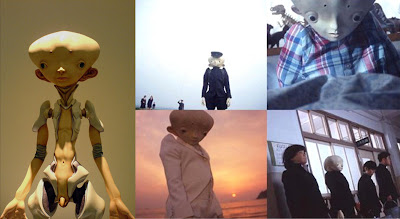 I just thought that after last Wednesday's post about the truly out there "Mariko Takahashi's Fitness Video for Being Appraised as an 'Ex-fat Girl'" that the Pow-Wow needed to give you more videos that would give small children nightmares. Well, small children and most adults, so when I saw this video at Mari Kanazawa's great blog Watashi to Tokyo I knew I had to host it here.

It's directed by famed Japanese pop artist Takashi Murakami, he of the self-dubbed "Superfalt" style, Louis Vuitton ad campaigns, and Kanye West CD covers, and based around his 2004 life-size cyborg sculpture "Inochi" (above left). Titled "Inochi-kun" it brings the to life the embryonic-looking sculpture and sets him on various school boy adventures (including those embarrasinging erections you're plagued with as an adolescent).

Okay, it may not be as disturbing as "Mariko Takahashi's Fitness Video for Being Appraised as an 'Ex-fat Girl'" , but it's definitely a head trip. Enjoy!

Dude, Inochi Kun is SO MUCH WORSE than Ex Fat Girl. You have no idea...