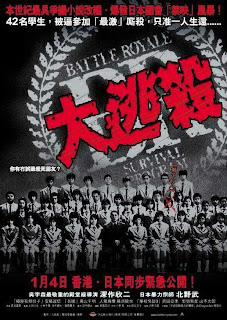 One of the highest grossing and most notorious Japanese films ever made, "Battle Royale" bears a reputation that dwarfs the film itself. While never officially banned in North America, it first attracted much public attention when attempts were made in Japan to ban both it and the original novel by Koushun Takami – attempts that both failed and, ironically, added to both works’ popularity. The film has never been given a proper Region 1 DVD release due to Toei’s unwillingness to fork over licensing for North American distribution (the reasoning behind this reluctance points to the film’s extremely violent content directly involving youths). Due to its semi-contraband status and the disturbing, undeniable parallels between it and school shooting incidents, the film has become the subject of much attention and debate, a word-of-mouth legend both over-hyped and overly damned in various circles.

"Battle Royale" takes place in an imagined timeline in which Japan is shaken by a high unemployment rate and violence and protest among its youth population. The government responds by establishing the Battle Royale Act, which occasionally selects via lottery one class from Japan ’s school system; its students are armed with weapons and forced to compete against each other for survival over the course of a three day “game.” Only one survivor must remain at the end of the three days or else the remaining students are killed. Such is the difficult situation that one class of forty-two finds itself in, their game presided over by Kitano, a former teacher of theirs. Focusing mainly on two students, Shuya and Noriko, and Shôgo, a transfer student and survivor of a previous game whom they befriend, the film tracks the various class members as they chose their own strategies for survival – some more chilling than others.

Director Kinji Fukasaku takes this boldly conceived story and manages to make a film that is both compelling and unsettling. At times, he accentuates the “thrill of the hunt” aspect with sweeping classical music and a suspenseful tone which fits the cat-and-mouse nature of the game. Similarly, there are quite a few melodramatic touches sprinkled throughout the film as various students grapple with feelings of sudden boldness, selflessness, machismo (particularly in the case of Shôgo, the clear “survivor-warrior” of the group) and love as they come to terms with their situation – which is understandable enough. These are, after all, merely children suddenly thrown into and forced to cope with a bizarre and very adult situation. 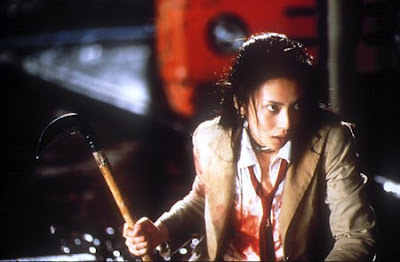 And it is that aspect which warrants the most attention in "Battle Royale", which is mainly concerned not with violence (which, while plentiful and graphic, is not morbidly lingered upon or inappropriately romanticized) so much as with the reasoning (or lack thereof) behind it, and the film’s most interesting moments come from its young characters and their various, revealing actions. For example, one bespectacled student advances on some of his students early in the game while reciting math equations and telling himself that he will survive and go on to a good school. When one female student meets another unexpectedly, she says while gripped with fear, “I was never close with your clique, but you’re alright.” Perhaps the most tragic incident occurs when a group of girls falls victim to their own paranoia and mistrust. Overall, the game works most effectively as a device which reveals to the viewer the psyche of Japanese youth, rendering their insecurities and adolescent feelings through a magnifying lens.

The most prominent acting role in the film is the teacher Kitano, played by none other than Takeshi Kitano. He is his usual stone-faced self, but with the slightest touch of abrupt moodiness and madness, stealing every one of his scenes as only he could. All of the young actors do quite well in their emotionally demanding parts, the notable standouts among them being the three leads, Tatsuya Fujiwara, Aki Maeda and Taro Yamamoto, Masanobu Ando as the remorseless, mop-headed psychopathic killer of the bunch and, of course, Chiaki Kuriyama, who would go on to achieve screen immortality as Go-Go Yubari in "Kill Bill".

Ultimately, "Battle Royale" is so much more than the mindless gore-fest that many harsh critics unfairly accuse it of being, as to do so is to ignore or dismiss the several fascinating ideas contained within both its premise and the film itself. It works as an effective piece of science fiction, imagining a frightening dystopic worldview not unlike those of "Nineteen Eighty-Four" or "A Clockwork Orange". Its critique of high school politics is highly revealing, digging into the issues of popularity-based hierarchies and segregation from a fresh and troubling vantage point. In the tradition of notable works such as "The Most Dangerous Game" and "The Lord of the Flies", it is a study of the human animal, exploring the roots and all too fragile boundaries of civilized behavior and simple ethics. Its examination of Japanese society is conducted not only in the game as it gradually unfolds, but also the back stories of such characters as Shuya (whose mother abandoned him and father, an unemployed loser, killed himself) and Kitano (who is despised by his own children). Seemingly centered on violence, "Battle Royale" carries its share of additional themes which, in fact, are just as prominent, and while it may not be the subtlest of films, it certainly isn’t lacking in food for thought.

Read more by Marc Saint-Cyr at his blog.
Posted by Chris MaGee at 2:12 PM