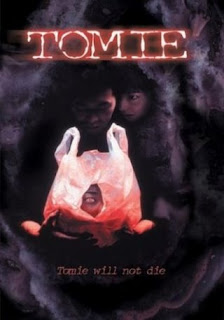 Adapting a manga like "Tomie" must pose as quite the challenging task to anyone brave enough to undertake the role. Unlike Junji Ito’s other mammoth manga masterpiece, "Uzumaki", which was adapted for the big screen by Higuchinsky the following year (2000), "Tomie" isn’t a linear series. While both series are made up of small self contained stories, "Uzumaki" remains one continuous story that slowly builds into a brilliant mountain of madness. "Tomie" on the other hand is filled with completely individual tales. Some may have reoccurring characters, and the last few do all tie in together, but they don’t provide a clean, linear framework on which to base a film. So the question is what tale would be the best to adapt, as the flagship film for the "Tomie" series. Writer/director Ataru Oikawa takes several of the smaller narratives and weaves them into one cohesive story. 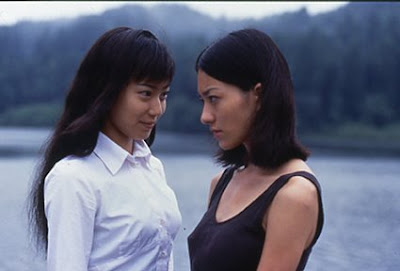 Tsukiko (played by "Tokyo Trash Baby's" Mami Nakamura) suffers from amnesia. Three years have passed since she was involved in a car crash that killed her boyfriend and best friend, wiping from her memory all events prior to the accident. She still suffers from nightmares and haunting visions, most of which involve Tsukiko finding herself covered in blood, taunted by headless corpses. Her psychiatrist is skeptical about the entire incident, and subjects Tsukiko to hypnotherapy. During one of the sessions, Tsukiko utters a girl’s name. Tomie. Meanwhile, a new gentleman moves into the apartment downstairs. He carries keeps a small cardboard box with him, and the ‘creature’ inside screams orders, yelling, mocking him, and making demands, until he does what it wishes. Tsukiko’s boyfriend and his co-workers, all employees at a Western themed restaurant, slowly become enthralled by the new employee, a girl named Tomie. As detective Harada (Tsukamoto regular Tomorowo Taguchi) unravels the puzzle of Tomie and Tsukiko, men gradually descend into the depths of madness, overtaken with jealousy, turning on each other while they fall under the spell of the immortal school girl demoness known as Tomie.

"Tomie" is classic Junji Ito fare, the world unraveling as madness consumes everyone that crosses Tomie’s path. And while it doesn’t depict this raving lunacy quite as effectively as either the manga or Higuchinsky’s "Uzumaki", it’s still quite a respective addition to the "Tomie" mythology. Made at the height of the J-horror craze, Tomie could have easily fallen into the trap of many of the sub-par films that followed in the wake of "Ringu". However, Ataru Oikawa chooses to take a different route, filling the screening with Giallo inspired madness. Tsukiko’s dream sequences and memory lapses are filled with Argento like imagery. Expressionistic lighting, an eerie, Gobin-esque score, a bare, experimental sound mix, and a complete absence of the classic yurei (ghost), "Tomie" strives to set itself apart from what one associates with J-horror. And set itself apart it does. It still creates the same sense of unease and malice that permeates films like "Ringu" and "Kairo", but stylistically it’s an entirely different beast. The films biggest flaw is that detective Harada at times becomes more a narrative tool, solely existing to feed us exposition about the history of Tomie, and less a full fleshed out character. Fortunately, Taguchi manages to keep his performance fresh and entertaining. Tomie is cute and twisted, and still ambiguous enough to leave you guessing about what the hell Tomie really is, and what she’s truly capable of.

Read more by Matthew Hardstaff at his blog.
Posted by Chris MaGee at 3:15 PM

I'd avoided this film for some reason, but now I'm really curious to see it.