Could "Departures" spark another Golden Age for Japanese Cinema? 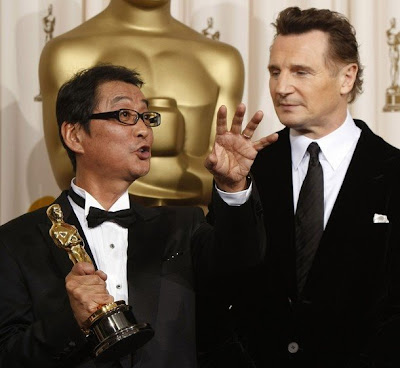 When Akira Kurosawa's "Rashomon" won the Golden Lion at the 1951 Venice International Film Festival the cinematic world was surprised. It wasn't because it was an undeserved win. Far from it, but this was a film whose producer Masaichi Nagata (below left) had famously hated, repeatedly admitting that it's story of the rape of a noblewomen and the murder of her husband by a highway bandit as told from multiple viewpoints made no sense to him.

The fact that Nagata didn't like what many view today as a cinematic masterpiece is irrelevant. As a business man he knew that he'd been given a unique opportunity, one that he could capitalize on by giving international audiences more of what they thought Japanese cinema was about: jidai-geki dramas filled with period costumes and sword play. During the next few years Daiei Studios, under the direction of Nagata, followed this strategy and released Teinosuke Kinugasa's "Jigokumon (Gates of Hell)" as well as a remarkable string of films from Kenji Mizoguchi: "Ugetsu", "Sansho the Bailiff" and "A Story from Chikamatsu", and the strategy worked. "Ugestu" ended up winning the Silver Lion at Venice in 1953 and "Jigokumon" took home a honourary Oscar for Best Foreign Language Film in 1955. While "Rashomon" may have introduced Japanese cinema to the world it was a combination of curiosity from international audiences, very high quality filmmaking, and some shrewd business decisions that led to what film historians refer to as the Second Golden Age of Japanese Cinema. What's interesting to note is that no Japanese film had been honoured with a Best Foreign Language Film Oscar since those peak years in the mid-1950s. That is until Yojiro Takita's "Departures" took home the award at this year's Academy Awards. 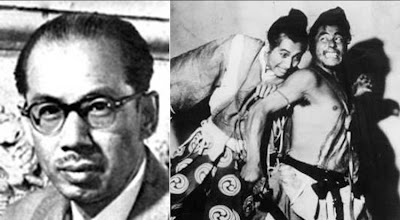 I can hear you out there now, "But Chris, how can you say that 'Departures' is the next 'Rashomon'?" Well, that's not what I'm saying, but what I am saying is that by some wonderful, dumb coincidence 2008 saw a wave of exceptional films come out of Japan and on February 22nd that wave crested with "Departures" win at the Oscars; a film like "Rashomon" that no one expected would win. Even Masahiro Motoki, who plays the lead role of Kobayashi in "Departures" was quoted as saying "I thought the Israel film was going to win," referring to the odds on favorite Ari Folman's "Waltz with Bashir". With the Academy's sometimes puzzling decisions when it comes to the Best Foreign Language Film category (the snub of Guillermo del Toro's "Pan's Labyrinth" in 2006 and Cristian Mungiu's Palm d'Or-winning "4 Months, 3 Weeks and 2 Days" not even receiving a nomination in 2007) Pow-Wow writer Marc Saint-Cyr, myself and some friends even debated whether "Departures" winning was just a goof, but in the same way that Nagata hated "Rashomon" the question as to whether the best foreign language film won in the category is irrelevant. What's important is that since the win international film critics and audiences have been reassessing and exploring the recent batch of films coming out of Japan.
Thankfully a number of the great films that came out in 2008 will see North American distribution in 2009. Regent Releasing not only picked up the rights for "Departures", but also Kiyoshi Kurosawa's Une Certain Regard-winner at Cannes "Tokyo Sonata", while Disney will be releasing Hayao Miyazaki's latest animated triumph "Ponyo on a Cliff by the Sea" in North American theatres this summer. This is very good news, but the question remains: with the J-Horror genre having fizzled and its main distributor Tartan in the process and "Asian Extreme" films becoming a blood geyser parody of themselves with the Media Blasters financed "The Machine Girl" and "Tokyo Gore Police" will the surviving North American art house and foreign film distributors encouraged by the success of "Departures" take a chance on other wonderful Japanese films from last year like Ryosuke Hashiguchi's "All Around Us" (below), Koji Wakamatsu's "United Red Army", Hiro-kazu Kore-eda's "Still Walking", Ryo Nakajima's "This World of Ours" and Sion Sono's "Love Exposure" (to name only a few)? 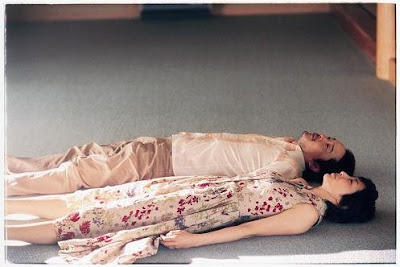 I think that the chance of this happening now is far more likely than a couple of weeks ago. In these hard economic times it's a no brainer for cash strapped distributors to bet on a winning horse, and with Masaichi Nagata's strategy of "give them more of the same" remaining just as true as it was 50 years ago it will hopefully mean that the equally cash strapped film studios in Japan will put their resources behind projects of equal quality, sensitivity and artistry as the ones I mentioned above. Success leads to success and so on and so forth.

Of course the hope that "Departures" winning at the Academy Awards could potentially spark a third Golden Age of Japanese Cinema may very well be the result of the naive speculation of an overly optimistic film blogger. A more likely scenario would be that Japanese studios would try to give Western audiences more of the same by producing syrupy "Departures" knock-offs while Hollywood will throw its dollars into another ill-advised remake ("Departures" starring Zach Braff and Katherine Heigl????) Personally, I have to hold out hope that what happened in the early 1950s could under the right circumstances somehow happen again. I don't think any of us could deny that 2008 was a high watermark year for Japanese cinema, but now we just have to see if the flood will continue and if the world will be receptive if it does.
Posted by Chris MaGee at 2:13 PM

I hope your right. It would be awesome to be able to see these films at the cinema as opposed to on dvd. Great post