The many names and lives of Yoshiko Ōtaka 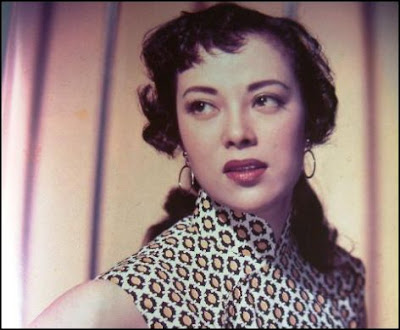 Chances are that you've not heard of Yoshiko Ōtaka before. To be honest up until this past week I hadn't either. It was only after a conversation online that I had with Midnight Eye co-founder Jasper Sharp that I had my eyes opened to a truly fascinating Japanese actress and singer... or was she a Chinese actress and singer... or American? That may be one of the reasons you may not have heard of Ōtaka, the fact that she's gone by many names during her 89 years.

Born in Fushun, Japanese occupied Manchuria in 1920 to Japanese settler parents she got her start acting and singing under her Chinese name, Li Xianglan (pronounced Ri Kōran) in films like "Honeymoon Express" and "China Nights" produced by the Japanese owned and operated Manchukuo Film Association. At the end of WW2 she returned to Japan and under her birth name continued her career, but another name change was about to take place. In 1955 she made her way to America to star in Samuel Fuller's "House of Bamboo" and various Broadway productions under the name Shirley Yamaguchi, but this switch to Hollywood came late in her career. By 1958 at the age of 38 she retired from the stage and screen and took her second husband's surname and became Yoshiko Ōtaka.

That very brief description of Ōtaka's career is more than interesting in itself, but it was also what she went through off screen that makes her a truly fascinating character. During her career in Manchuria she kept her Japanese heritage a secret, a move that nearly got her killed at the end of WW2. Despite her popularity Li Xianglan (Ōtaka) starred in films heavily loaded with Japanese propaganda, so just after the war she was arrested by Chinese authorities who charged her with treason and collaboration with the Japanese. If found guilty she would have been put to death, but when the fact of her ancestry came to light the charges were dropped and she was expelled from the country along with the rest of the Japanese settlers and military forces.

Ōtaka wouldn't forget her childhood in Manchuria though, nor the cruelty inflicted upon the Chinese by the occupying Japanese forces. She has spoken about one memory in particular, seeing Japanese soldiers tie a Chinese man to a tree and beat him to death, as one that motivated her advocacy for people suffering under occupation. It was through her current events show "Sanji no anata (You at 3 O'Clock)" which aired on Japanese television between 1969 and 1974 that she highlighted these issues, but it was her stance and fact-finding trips to Palestine that had her, along with pinku eiga directors Koji Wakamatsu and Masao Adachi, marked as being a leftist radical. This wouldn't stop Ōtaka, who in 1974 was elected to the the upper House of the Japanese parliament in which she served for the next 18 years. She then went on to serve as the Vice President of the Asian Women's Fund, an organization that ran atonement projects across East Asia for former "comfort women" enslaved by the Japanese Imperial Forces during WW2.

Like I said, I'm still learning about Yoshiko Ōtaka myself, but if you're interested in learning along with me you can check out some clips from her films below, as well as a clip from the 2007 Japanese TV biopic "Ri Kōran" starring Aya Ueto as Ōtaka. There are also quite a few online resources for her like the her entry on Wikipedia as well as this interview conducted with her in 2001 in which she discusses her involvement with the Asia Women's Fund. Ōtaka is also the subject of the latest novel by author Ian Buruma titled "The China Lover".

I actually know of her! She can be seen (credited as Yoshiko Yamaguchi) in the female lead role in Akira Kurosawa's "Scandal" - a great little flick.

Please see a biography of Yamaguchi at www.yoshikoyamaguchi.blogspot.com