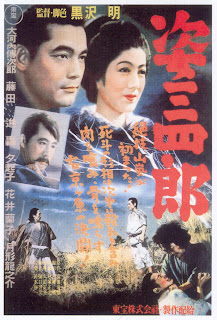 "Sanshiro Sugata" was Akira Kurosawa’s debut film. Released at the height of World War 2 (March 25th, 1943 to be exact), the film became a huge success, spawning a sequel two years later. It was based upon a popular novel of the same name by Tsuneo Tomita, marking the first time Kurosawa would adapt a work of literature for the silver screen. This was the first, in a long line of firsts, which make up the cinematic extravaganza that is "Sanshiro Sugata".

Sanshiro Sugata is played by Susumu Fujita, who would go on to work with Kurosawa in nine more films, such as "The Hidden Fortress" and "Yojimbo". Set in the late 19th century, Sugata travels to a bustling town, eager to learn jujitsu from the master of the local Shimmei School . They’re a rough looking group of martial artists, who spend less time training, and more time sitting around or getting into fights. Sugata fits in, but quickly experiences a revelation one night when he witnesses a man defeat his entire jujitsu school, tossing them into the river. This stranger uses a style Sugata is unfamiliar with, Judo. Sugata quickly abandons his school and joins up with Shogoro Yano of the Shudokan School . However, Sugata is still unfocused, and one evening beats up a group of local ruffians. He enjoys the brawling far too much, and Yano expels him. Sugata falls into the throes of misery, and jumps into Yano’s pond. He spends the night in the ice cold water, until he has a revelation, and realizes he must become a focused student of the martial arts. Through a series of fateful events, Sugata soon finds himself defending his school in a series of bouts in local tournaments, until he must finally face off against the best student the Shimmei School has to offer, and a climactic showdown begins. 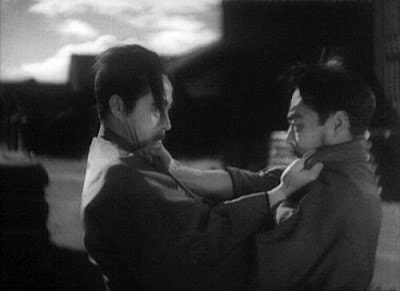 The plot of "Sanshiro Sugata" would become a template for many martial arts films to follow in its path. Rival martial arts schools, a quick tempered student who must learn discipline and focus, and an old rival bent on the destruction of the protagonist. But what set’s the film apart from the many films to follow it is its unique cinematic style. It’s apparent even with his first film that Kurosawa was a natural. The fight scenes are tense, and expertly crafted. Long takes build the suspense, until the final moment when Kurosawa blasts away with a series of beautiful quick shots. Its probably one of the first films to utilize slow motion for dramatic emphasis during a fight, as a sign falls from the wall onto the judo master who was just thrown into it. Kurosawa seemed to have the flexibility to experiment with various cinematic techniques, some of which would become hallmarks of his style. The film utilizes a great many wipes and has some amazing montages used to depict the passage of time. It repeatedly uses the staggered cutting in from wide shot, to medium shot, to close up. And while there is much cinematic flair evident in the film, Kurosawa also shows restraint, waiting to cut to his perfectly composed close-ups until just the right moment, when the impact will be that much more effective.

Yes, it is a propaganda film, but Kurosawa manages to keep the nationalism to a minimum. Sure, the winner of one of the tournaments wins the honor of training the cities police force, and sure, Sugata, after falling in love with his aging rivals daughter, is forced to fight the old man, for the good of the system, rising about his individuality, and doing what’s ‘right’, but Kurosawa beautiful crafts such a vibrant cinematic experience, from a film which would have otherwise been a derivative exercise in nationalist fervor, that one can’t help but be amazed by what the master accomplished. It is his first film, and his first great film.

Read more by Matthew Hardstaff at his blog.
Posted by Chris MaGee at 3:07 PM