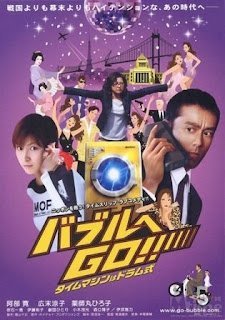 Time machines sure are great, huh? You can whiz around hunting dinosaurs, hanging out with King Arthur, visiting futuristic cannibal sub-humans and most importantly you can tweak events so that you end up asking that really pretty girl in high school to the prom. Okay, maybe you can do something a little more important than possibly getting yourself laid (although that’s pretty damn important). I know! How about fixing the Japanese economy? (Wouldn't Obama like to do that with the world economy right now, huh?) That’s exactly what 23-year-old Mayumi Tanaka (“Departures” Ryoko Hirosue) is recruited to do in Yasuo Baba’s utterly painful 2007 sci-fi comedy “Bubble Fiction: Boom or Bust”.

Here’s the set up: It’s 2007 and the Japanese economy is in the crapper. Mayumi has yakuza chasing after her boyfriend’s ¥2 million debt, but he’s gone AWOL and she’s flat broke. That’s not the worst of it though. Her mother Mariko has just committed suicide. We assume that her debt was bad enough that she jumped off a cliff and drowned herself in the ocean. Poor Mayumi, left grieving an empty coffin. But wait! A gloomy agent from Japan’s Ministry of Finance named Shimokawaji, played by a prematurely aged Hiroshi Abe, shows up with a newspaper that has a picture of Mayumi’s mom alive and well on its front page. The only thing is that it’s a newspaper from 1990! What gives?

It turns out that Mayumi’s mom isn’t dead after all. She’s on a top secret mission to go 17 years into the past to stop legislation designed to prevent wild real estate speculation, legislation that when it was passed on March 3rd, 1990 caused banks to default on their loans and the subsequent cascade effect brought about the bursting of Japan’s 1980s Bubble Economy and ushered in the nation’s worst recession. If her mission fails Japan will be totally bankrupt in two years and chaos will break out that’ll make “Mad Max” look like bumper cars. The problem is that Shimokawaji and his colleagues have lost contact with Mariko and they need someone to go back to 1990 to find out what happened to her. “But how?” you may be asking. Well, in some truly dopey cinematic one-ups-manship it turns out that Mariko accidently converted a washing machine into a time machine while designing household appliances at Hitachi. Take that “Back to the Future” and your dumb Delorean! 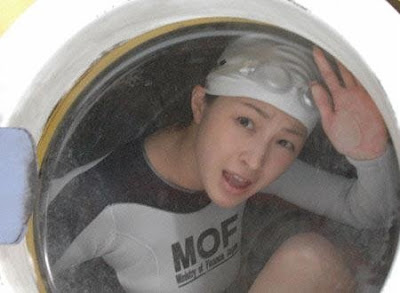 Ryoichi Kimizuka, who penned the scripts for both “Bayside Shakedown” films puts Mayumi on spin and wash, sending her back to a time when the discos were as full as people’s wallets, businessmen would flag down taxis by waving ¥10,000 bills and Tiffany pendants were handed out like they were Kleenex. Mayumi gets culture shock in her own country, and if she wasn't so damn annoying the film might (and I have to stress might) have worked, but Hirosue is so damn pixyish, so pert and sickeningly cute that I wished I was watching Julia Roberts or Meg Ryan in their spunky/ cute heyday instead... and that's pretty damn bad. You can see the gags coming from a mile away: Mayumi giggles her way through the 80s fashions, music and watching old TV commercials, pouts when she realizes that there's no cell phone reception in 1990 and alternates between being a shocked innocent and a coy tease when she discovers that Shimokawaji was an A#1 pussy hound in his younger days. The other thing you can see coming a mile away is the ending of the film, although I won't spoil it here for people who are clueless to the obvious, but it does involve two versions of Mayumi's mother, a despotic businessman named Serizawa (Masatô Ibu) and a plot twist that'll actually make you glad that Mayumi didn't get her kit off and jump in the sack with Shimokawaji.

Another thing that might (and again I must stress might) have made "Bubble Fiction: Boom or Bust" a little more enjoyable is if it wasn't so damn culturally specific. Let's face it, this film wasn't made for foreign audiences. It was made for Japanese so that they, like Mayumi, could get a dose of nostalgia while having a good laugh, Japan's version of "The Wedding Singer", but whereas I could laugh at Adam Sandler in the latter I was just left floundering with "Bubble Fiction" because I didn't grow up in Japan during the 80s (ah well...)

By the end of "Bubble Fiction: Boom or Bust" the only thing I was left with was a desire to have my own time machine so that I could hop inside and scoot back to get those two hours back that I wasted watching it.

Were you a bit harsh on Ryoko Hirosue, maybe? I just watched this last night with a small group, and it was very well received. It's not transcendent cinema by any stretch, but it's a solid amusement: Well-paced, cute, with appropriate cameos and solid performances by commercial actors. My biggest beef was that Abe never got to cut loose with that grin of his.

It's trivial but fun!