REVIEW: Shall We Dance? 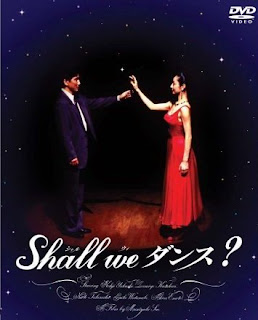 At the time of its release in 1996, "Shall We Dance?" was easily one of the hottest films to come out of Japan . A great success both at the box office and among audiences and critics, it attracted much attention both at home, where it was bestowed with numerous honors including 14 Japanese Academy Awards, and in North America , where it became a veritable surprise hit. Eventually, Hollywood made the predictable move of launching a remake which was made in 2004 and stars Richard Gere and Jennifer Lopez. As is usually the case, it really needn’t have been made, what with the original already being so delightful and, more importantly, easily transcendent beyond the barriers of language and culture.

Kôji Yakusho (from Kiyoshi Kurosawa’s "Cure") stars as Sugiyama, a mild-mannered office drone who has achieved the model lifestyle, complete with a wife, teenage daughter and house that he has recently bought. However, he still feels like there is something missing from his life. That’s when he starts catching glimpses of a beautiful woman standing at the window of a dance school on the subway route he takes home every night. Intrigued, he eventually gets up the nerve to step off the train and sign up for dance classes to get close to the woman, a teacher named Mai (Tamiyo Kusakari in, remarkably, her only screen credit to date). But instead, he is placed in a beginner’s class with a different instructor, which leads him to acquiring, then developing a genuine love for his new after-work activity. 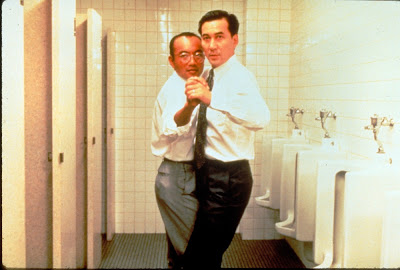 "Shall We Dance?" offers so much to enjoy simply from its diverse cast of characters, particularly the quirky members of Sugiyama’s class. Along with him, there is a short, energetic go-getter, a painfully shy man who gradually overcomes his insecurities and, most amusingly, a coworker of Sugiyama’s who seeks refuge from his outsider status in the office through his alter ego as a wigged, overly vivacious tango dancer. There is also the kindly woman who teaches the beginner’s class and Mai, who is given more of a back story involving a tragic incident at the international dance competition in Blackpool , England and her feelings for dance. Outside of the goings-on at the dance school is Sugiyama’s wife, whose growing suspicions prompt her to hire a pair of private detectives (who entertainingly pop up throughout the film). While sure that he isn’t having an affair, she is still rightfully perplexed concerning her husband’s strange behavior.

While the tone of the film is light and lively, it admirably never becomes overly sappy or predictable. Its characters are treated by writer and director Masayuki Suo with a great amount of respect, and their passion for dance is handled just as seriously as they themselves pursue it. For each of the students and teachers, dance is solely about the pure joy and liberation that it grants them, and their strong and inspiring affection for it radiates off the screen. Filled with many twists and turns and invested with equal parts sentimentality and sensibility, "Shall We Dance?" is an undeniably well-made and heartwarming pleasure. Skip the remake with J-Lo, "Honey" and "Step Up 2: The Streets"; if there’s one movie based around dancing that’s worth seeing, it must be this one.

Read more by Marc Saint-Cyr at his blog.
Posted by Chris MaGee at 3:16 PM