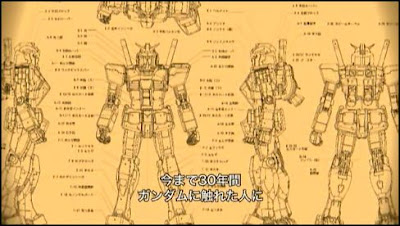 Last Month we told you about how a life-sized (well, life-sized if they existed in real life) RX-78-2 Gundam from the "Mobile Suit Gundam" was being erected on Tokyo's Odaiba island this July to mark the 30th anniversary of the famed animated series. Now Anime News Network, the folks who turned us onto this story in the first place, have word that Yahoo! Japan has posted the first of a series of behind-the-scenes videos of this momentous construction project. This first video titled "For the next step" deals with the planning leading up to the construction of the internal steel armiture of the RX-78-2's legs. More videos will apparently follow every Thursday until the unveiling of the statue on July 23rd.

Head over to Anime News Network and follow the top link to this first video.
Posted by Chris MaGee at 4:34 PM

Nice post. I learn something new and challenging on blogs I stumbleupon everyday. It will always be useful to read content from other authors and use something from other websites. Feel free to visit my website; 야설

There is certainly a lot to learn about this topic. I really like all the points you made. i enjoy to read all comments here! i really like the website you share on us .I appreciate the effort you made.Very informative idea.i want to invite you to visit my site please try it.thank you so much Feel free to visit my website; 한국야동


Good way of explaining, and pleasant post to obtain information about my presentation focus, which i am going to present in college. Feel free to visit my website;
국산야동


Wonderful article! That is the kind of information that are meant to be shared around the net. Disgrace on the seek engines for not positioning this publish upper! Come on over and talk over with my site . Thank you =) Feel free to visit my website; 일본야동

These are actually great ideas in regarding blogging. You have touched some pleasant factors here. Any way keep up wrinting. Feel free to visit my website; 일본야동