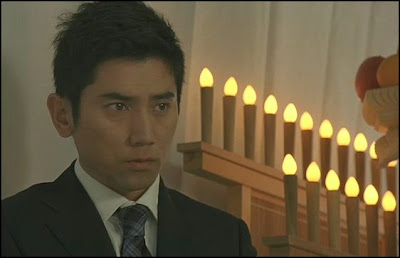 The folks at Regent Releasing contacted me this week to let us know that in advance of the North American theatrical release of Yojiro Takita's "Departures", opening here in Toronto on June 12th, a brand new HD English-subtitled trailer for the Best Foreign Language Film Award Winner at this year's Oscars has been put up at Apple Trailers. It's a very nice one too mainly because it avoids the one great fault of foreign language film trailers cut for the English language market: it actually features the actors speaking. I somehow feel cheated when I see a trailer for a foreign film where we just see scenes of people laughing, crying, strolling... whatever, but the only voice is of one of those 12-foot tall big booming voiced guys who sound like they chain smoke unfiltered cigarettes. You know the guys I'm talking about, "It's a story of love... life... and finding out where you really belong."

Check out the full HD trailer for "Departures" here, and while you're at it you can check out a handful of scenes from the film at the official website that Regent Releasing has set up for it here.
Posted by Chris MaGee at 4:11 PM