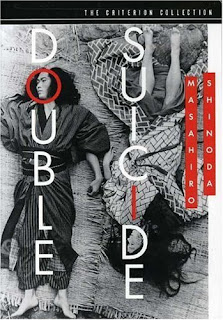 Earlier this year in a review of Masahiro Shinoda's "Samurai Spy" I said that it was "simply one of the most beautiful looking black and white films I've seen...". A true statement, but I think it gets beat out by Shinoda's later stunning "Double Suicide". He creates opportunities in just about every scene that highlight contrasts and plays with light and shadows masterfully. This enables simple outdoor shots or walks down corridors to be nothing short of breathtaking. It also helps to emphasize the stage like settings used to tell the tale of this old bunraku play.

The opening minutes of the film show scenes of preparation by puppeteers and set designers in an almost documentary like fashion. They are getting ready to put on the performance that we are about to see except that when the story starts, all the puppets have been replaced by actors. Throughout the film, dark cloaked people hover around the events and represent the puppeteers who are guiding the action - they move props, change sets and lighting and essentially guide the actors through the story. As mentioned, the sets are erected like they are being used in a stage play, so they have moving walls, sharp angles and several very emphasized decorations (the walls and floors look like the tattoos on the back of one of the characters). It's within this very stylized and restricted environment where much of the story takes place. 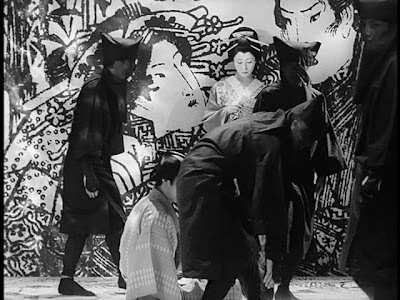 Koharu is in love with Jihei. She is a courtesan and he is a small business owner with a wife and two children. Though he has promised to "redeem" her one day (buy her out of her position), he can barely scrape together the money to support his family and what he has left he uses to pay for the monthly visits to her. They realize that they are caught in a cycle that has no way out (there's a reason why Jihei's home looks at times like a jail cell). "Meeting is joy and pain" they agree, so they plan to die together. Jihei's wife Osan knows of his infidelities and can live with them, but she is greatly worried that he may do something rash like killing himself. She writes to Koharu and asks her to give him up in order to save him. Meanwhile, various family members attempt to either shame Jihei into giving up Koharu or convince him to divorce Osan (who is actually Jihei's cousin).

Koharu and Osan are both played by the fabulous Shima Iwashita (who is also married to Shinoda). Their mutual respect for each other helps to emphasize the dual nature of Jihei's (and likely most of society's) view of women - mother and whore. There doesn't seem to be much other choice. Of course the men are slotted into their own categories - the wealthy, the samurai, the labourer or the servant. Money seems to be the saviour in this environment - it will save Jihei's shop, it will redeem Koharu and it will save Jihei's family. And yet, of overriding concern to most is what others perceive and the possibility of shame.

Jihei and Koharu don't seem to be the only ones trapped.