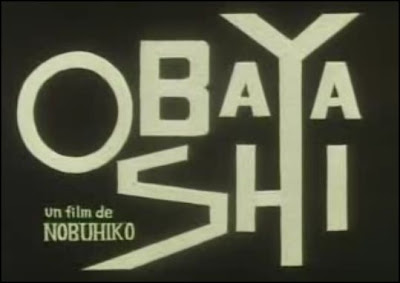 I think that of all the cinematic discoveries of this past year Outcast Cinema's Mark Walkow turning me onto Nobuhiko Obayashi's debut feature film "House" was probably the biggest and most enlightening. Seeing that film reminded me how just when you think you've seen it all that there can still be a film out there that can totally scramble your brain, albeit in wonderful and puzzling ways. Check out my review of the film here.

One thing that makes "House" and the rest of Obayasahi's filmography, particularly his 1983 adaptation of Yasutaka Tsutsui's young adult novel "The Girl Who Leapt through Time" and his 1989 cross-cultural tale "Beijing Watermelon" so distinctive are his inspired filmmaking techniques. Obayashi isn't afraid to use jarring blue screen effects, lightning fast jump cuts and in the case of "Beijing Watermelon" wooden and cardboard-painted sets to double for the Chinese capital when the events of Tiananmen Square prevented him from traveling to Beijing to tell the story of a Tokyo grocer who pours his savings into helping a group of impoverished Chinese students. The source of this often crazy ingenuity comes from Obayashi's roots in experimental film.

As a child Obayashi was fascinated by filmmaking. His father, a doctor in the seaport town of Onomichi, Hiroshima Prefecture, gifted him with a film projector for his 10th birthday, then as a teenager he witnessed Yasujiro Ozu and his crew shooting scenes for the landmark film "Tokyo Story" in the streets of his hometown. Once Obayashi reached the age of 18 he knew what he wanted to do. In 1956 the then 18-year-old enrolled in Seijo University's film program, but ended up dropping out before graduating. The move didn't seem to hurt his career filmmaking though. Obayashi would return to Onomichi to make a series of 8mm and 16mm experimental short films, one of which, 1963's "Tabeta Hito" won him the the Jury Prize at the Festival of International Experimental Film in Belgium. Later he would take the techniques he'd learned from those film and apply them a successful career in shooting over 2,000 commercials, and from there his debut feature "House".

More people have read about Obayashi's early experimental films than have actually seen them, but the fantastic website UbuWeb, a receptacle of avant-garde poetry, prose, sound pieces and film, are trying to remedy that by posting ten of Obayashi's early films dating from between 1960 and 1968. Not only is his prize-winning "Tabeta Hito", a strange mash up of a cannibalistic dream sequence and extended, almost Andy Warhol-esque shots of people eating in a restaurant, represented, but so is 1966's "Emotion", his psychedelic homage to Roger Vadim's 1960 film "Et mourir de plaisir", and 1964's "Complexe" with dance sequences seemingly inspired by Jerome Robbins' synchronized choreography in Robert Wise's "West Side Story". It's not all head-scratching weirdness though. UbuWeb has also posted a loving 19-minute documentary that Obayashi made in 1963 about his hometown simply titled "Onomichi" that perfectly captures the town's narrow, maze-like streets and sunny bay.

If you have been lucky enough to see "House" or any of Oabayshi's other films then do yourself a favour and head to UbuWeb here and spend an afternoon or a night watching these often strange, but inspiring shorts that went on to form the basis of his four decade and still counting career.
Posted by Chris MaGee at 4:06 PM