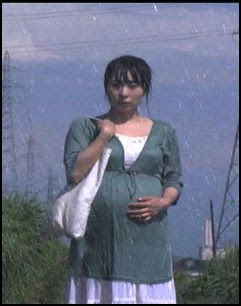 If you were compiling a list of the most promising young independant filmmakers in Japan at the moment, you could easily place 33 year-old Masahide Ichii at the very top. Starting his career as a comedian and actor, he went on to graduate from Kwansei Gakuin University, and made his directorial debut with the 2005 comedy, "Dog Days Dream", starring Ren Osugi as a poor paper collector. For his sophomore effort, Ichii went from comedy to drama to deliver a beautifully told story of jealousy, grief, and the redemptive power of friendship with "Naked of Defenses (Mubobi)".

Set in the rural landscape of Ichii's home prefecture of Toyama, "Naked of Defenses" centers around two employees of a small factory that produces molded plastic screwcaps and nozzles.
Chinatsu (Sanae Konno) is new on the job and to her coworkers' surprise, almost eight months pregnant. A newlywed just arrived in the country with her unemployed husband, Chinatsu has no choice but to work at the factory. Despite this, she is up to the task - cheerful, eager to learn, and ready to reassure her new employer that her pregnancy won't affect her performance. At first, the other workers question this, what with Chinatsu not being able to lift any of the bins in the warehouse, and her frequent trips to the bathroom, but soon every new kick and turn of Chinatsu's unborn child has them lining up to feel her belly ... all except one.

Ritsuko (Ayako Moriya) is assigned to train the new worker. She dutifully gives her a tour of the facility and schools Chinatsu on how to inspect the caps and nozzles for any number of flaws, but behind her accommodating smile there's an icy reserve. Ritsuko is a woman apart from the rest of the workers. She rarely joins in the daily chatter and gossip on the inspection line, and in the evening she walks home alone through the rice fields that surround the factory. Chinatsu begins to follow her home each night, trotting behind her like a playful puppy, but after a practical joke involving Chinatsu faking labour pains results in an angry slap from Ritsuko, we wonder if friendship will ever be possible between these two women. We're also left wondering what lies at the heart of Ritsuko's melancholy.

It's through Ichii's camera that we follow Ritsuko home to a fractured marriage where her husband eats and sleeps separately from her, only communicating to let her know that the toilet roll int he bathroom needs replacing or that the movies need to be returned to the video store. This wall of silence between Ritsuko and her husband has been built ever since she miscarried, the result of a car accident. From that point on she has shut down her feelings, becoming nothing more than another machine in the plastics factory, just another defective part thrown to the side while someone like Chinatsu lives the happiness that should have been hers.

"Naked of Defenses" is like a pendulum that swings between crippling grief and bright renewal, both in its plot and in the construction of the film itself. As Chinatsu begins an uneasy friendship with Ritsuko, Ichii not only includes some lovely scenes of gentle humour like the two women playing like children with an air compressor in the factory, but also uses juxtaposed imagery to convey the emotional currents between them. Ichii, who also edited the film, cuts from clinical ultrasound photos to a snail crawling on a lush green leaf, from a smiling photo of Ritsuko with her husband to food going cold on the table. Ichii uses this back and forth in mood and image to masterfully build to the film's unprecedented climax (to say more would be to spoil the ending).
If it was not for the redundant use of voiceover narration by Ritsuko at one point and the rather puzzling use of a red frisbee as an indicator of moments of inspiration and courage, I would dare say that "Naked of Defenses" is a perfect film. If you get a chance to see this rare gem, please don't pass it up.
Posted by Chris MaGee at 4:38 PM


Wonderful illustrated information. I thank you about that. No doubt it will be very useful for my future projects. Would like to see some other posts on the same subject! Feel free to visit my website;
일본야동


I like what you guys are up also. Such smart work and reporting! Carry on the superb works guys I have incorporated you guys to my blogroll. Feel free to visit my website;
국산야동

everyone an extremely breathtaking chance to read from this blog. It is always so lovely and jam-packed with a great time. Feel free to visit my website; 일본야동