"A Normal Life, Please!" takes up the fight for worker's rights in Japan 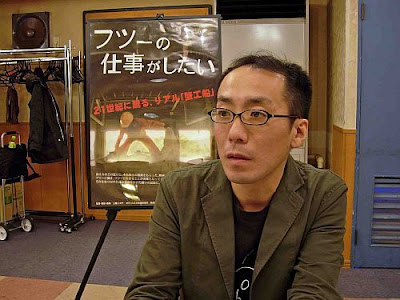 I've realized more and more lately how much I seem to be drawn to the recent batch of fascinating documentaries that have both been coming out of Japan and being made about Japan, some I've been fortunate to see like Kazuhiro Soda's "Mental", Risa Morimoto's "Wings of Defeat", Linda Hattendorf's "The Cats of Mirikitani", and some I'm dying to see like Takako Matsumoto's "Near Equal Yayoi Kusama: I Adore Myself", Jun Kawaguchi's "77BoaDrum", and Yuri Nomura's "eattrip". Thankfully I'll soon be getting a chance to see a documentary that has intrigued me ever since I heard it was being programmed as part of the Nippon Digital portion of the upcoming Nippon Connection Film Festival which runs in Frankfurt from April 15th to 19th.

"A Normal Life, Please!" is directed by Tokachi Tsuchiya (above) blows the lid on the Japanese government's gradual easing of labour regulations to allow companies to hire more casual and irregular workers. While it may be good for the companies, who do not have to provide benefits, vacation or paid sick leave to these workers it's obviously a nightmare for those employed in these jobs. One of these, a cement truck driver named Kaikura who works an average of 552 hours a month, as he begins to petition his employer, Toutou Transport, to begin to honour union regulations. As you can see from the trailer below it's no easy task for Kaikura or many of the other casual workers who in some cases are literally killing themselves to make ends meet.

Tsuchiya is part of Video Act, a filmmaker's collective formed in 1998 by Yutaka Tsuchiya (no relation) dedicated to highlighting social injustices taking place in Japan. Video Act were also involved in the production of Horoki Iwabuchi's documentary "Sounan Furiitaa (Freeter's Distress)" which I reported on at the beginning of March.

Keep checking back for a review of this doc in the days and weeks after Nippon Connection. Until then, as long as you're Japanese is good, you can head to the official site for "A Normal Life, Please!" here after checking out the trailer.