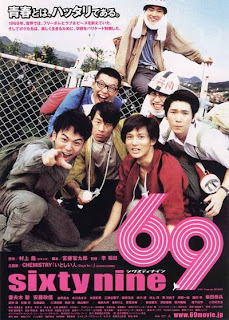 There tend two be two distinct type of movies in the contemporary teen film genre. One are the sex comedies that take their cues from early 80s movies like "Porky's" and "Losin' It", the other are the nostalgic and sometimes quirky coming-of-age comedy/ dramas that John Hughes perfected with movies like "The Breakfast Club" and "Pretty in Pink". One type often bleeds into another, especially with the recent influence of Judd Apatow's films, but things have basically shifted between those two poles for a good 25 years or so. Of course I'm starting things off with American examples here, but Sang-il Lee's 2004 comedy "69 sixty-nine" is definitely a teen comedy, one of the latter coming-of-age variety set during the late-60s and thus one that has crossover appeal to middle-aged Japanese, but a teen comedy none the less. It was also a film that I had pretty high expectations for because of its pretty impressive artistic pedigree, but in the end it' only a slightly better than average and marginally funny film.

First off "69" is based on the 1987 semi-autobiographical novel by Akutagawa Prize-winning author Ryu Murakami, the same man whose works formed the basis of such films as Takashi Miike's "Audition", Tetsuo Shinohara's "Karaoke Terror", Hideaki Anno's "Love and Pop", and the controversial "Tokyo Decadence", directed by Murakami himself. All of those films did a very good job bringing Murakami's dark take on contemporary Japan to the big screen, but "69" the novel is a very different animal. Set in Sasebo, Nagasaki (Murakami's birth place) it follows the adventures of Ken (played in the film by Satoshi Tsumabaki), your average 17-year-old boy who despite his professed love for the poetry of Arthur Rimbaud and the films of Jean-Luc Godard really only has one thing on his mind: girls. In Ken's case he's fixated on one particular girl, a pretty classmate nicknamed Lady Jane (Rina Ohta) after the Rolling Stone's song. It's the pursuit of Lady Jane or members of the fairer sex in general that motivates pretty much everything Ken and his buddies Adama (Masanobu Ando), and Iwase (Yuta Kanai) friends do from organizing a mini-rock festival based on Monterey Pop and Woodstock and in sleepy Sasebo (because girls take their tops off at festivals!) to forming a radical student group they dub "Basara, Erotic God in Another World" so they can barricade and graffiti their high school (because girls love revolutionaries). 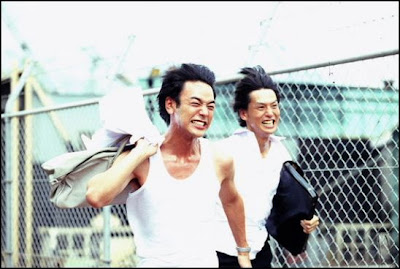 In terms of plot this light comedy isn't really something that you'd normally relate to Ryu Murakami, but by having Kankuro Kudo, who penned the screenplay for Isao Yukisada's far superior 2001 teen movie "Go", as well as Fumihiko Sori's "Ping Pong" and Nobuo Mizuta's "Maiko haaaan!!!", you'd think that the skewed Murakami aesthetic would come through. In a few brief scenes it does. There's a hint of a darker reality when Ken's father (Kyouhei Shibata) sends his friends in the local yakuza to bail his son out of a bind, or a nice little nod to the strangeness of the late-60s Japanese experimental film scene when Ken and his friends make an 8mm film that Shuji Terayama would have been proud of, but for the most part Kudo and director Lee deliver something that should be admirable for its timeless story of teenage boyhood, but ends up being pedestrian.

The so-so nature of "69" isn't any fault of Tsumabaki, Ando or any of the other actors and actresses. The comic timing is solid and Tsumabaki is genuinely funny in quite a few of his scenes (a talent he'd carry over into Koki Mitani's "The Magic Hour"), but for the most part "69" is made up of your standard teen movie stereotypes: The "cool" older student (Ryo Kase), the nerdy friend (Yuta Kanai), the gym teacher from hell (Kyusaku Shimada), and the bumbling but understanding teacher (Ittoku Kishibe). Of course Sang-il Lee would go on to make the blockbuster "Hula Girls" a few year after "69", a film that left me equally unimpressed, but if you were a fan of that film or of some of the other feel good comedies that have made such an impressions around the world like "Swing Girls" and "Water Boys" then you may want to give "69 sixty-nine" a look.
Posted by Chris MaGee at 2:58 PM