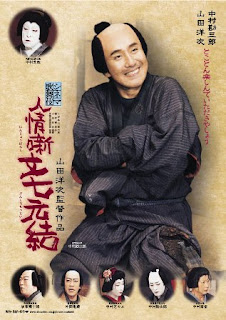 When most people think of kabuki theatre they think of actors dressed in elaborate costumes and wearing cake make up giving highly stylized performances in dry historical dramas that cater to a limited audience, but a quick survey of the origins of kabuki tell of a very different form of entertainment. While Noh theatre, which preceeded kabuki by a good three hundred years, was performed on temple grounds for the upper classes and consisted of stories culled from Japan's mythic past, masked actors, and a chanted narration kabuki appealed to the masses. The first kabuki performances took place in the early 17th-century in the dry riverbed outside the Kitano shrine in Kyoto, organized by a female priest named Okuni who gathered together the city's low-lifes, misfits and prostitutes and coached them to deliver their own lines and to tell stories about everyday life. This new form of street theatre was an immediate hit, spreading like wild fire throughout the country.

Even though the play "The Sentimental Plasterer", based on a rakugo story by San'yutei Encho, can only trace its history back to 1905 its story of the struggling lower classes perfectly conveys what made kabuki so different from Japan's previous theatrical forms, in fact if you were to update the plot of the play to the present day you could easily see its characters ending up on an over the top daytime talk show. Indulge me for a second... An alcoholic drywaller and compulsive gambler has driven his family so far in debt that his teenage daughter decides that the only way to prevent her father and stepmother from getting thrown out into the street is to star turning tricks. I could definitely see that story playing on Jerry Springer.

In the play set during the late 1800s, the plasterer, Chobei, heads to the local brothel to save his daughter from a life of prostitution. The mama-san of the brothel makes him a deal: she'll give him 50 ryo (roughly $7,500) to pay off his debts and guarantee his daughter will only work as a maid. If he can't pay back the loan in a year then she has to start taking clients. Everything seems solved until Chobei encounters a young shop clerk who is about to throw himself into the river because he's misplaced his master's 50 ryo. What is Chobei to do? Keep the money or save this young man's life and go home empty-handed to his wife who will think he's gambled away the money again. 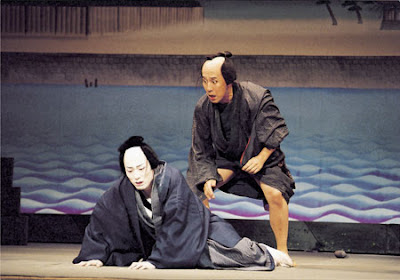 It's an interesting dilemma, one that made it a popular play for over a century, especially with the famed Nakamura family of actors whose lineage stretches right back to the beginnings of kabuki theatre. Two generations of Nakamuras star in the 2007 production that director Yoji Yamada captured in hi-def for Shochiku's ongoing "Cinema Kabuki" project. Started up in 2003 with an eye on taking the successful Live at Lincoln Center concept of screening opera for film and TV audiences Shochiku, who own the vast majority of kabuki theaters in Japan, have been tagging directors to film various popular kabuki plays in high definition and full surround sound to give movie audiences not only in Japan but around the world the full kabuki experience. In the case of "The Sentimental Plasterer" they couldn't have made a better choice than Yamada. The character of Chobei, played by Kanzaburo Nakamura in a tour-de-force comedic performance, is only a couple of generations removed from Yamada's most famed creation Tora-san. Yes, he's a somewhat clueless, devil may care vagabond who likes to drink and gamble, but he's a good-hearted devil may care vagabond. Following the formula of the Tora-san films when Chobei comes across the distraught young shop clerk (played by Nakamura's son Kantarou) he immediately gets involved, sympathizing with another down on his luck character despite the complictions that will obviously arise.

Like I mentioned Nakamura's performance is hilarious in "The Sentimental Plasterer", as are those of all the other actors, but what I found so surprising is that not only does the HD technology perfectly capture the details of the costumes and sets of the play, but also the facial expressions the actors which subsequently enhances their performances. It's hard to describe how the technology accomplishes this unless you actually get a chance to witness one of the Cinema Kabuki films, something I was very lucky to have done recently in Toronto; but take more word for this: If you get a chance to see "The Sentimental Plasterer" or any of the other Cinema Kabuki productions do not, I repeat, do not let the opportunity pass you by.
Posted by Chris MaGee at 3:14 PM