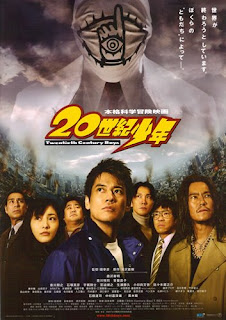 There are many occasions in life when you have to kill time. They can be long plane or train rides or lengthy waits at the doctor's office. Sometimes there's just an afternoon filled with a whole lot of nothing (although these stretches are become more and more rare for me as of late). Regardless of the frequency or duration everyone has found themselves dangling at loose ends at times, and we all have our chosen methods of filling these gaps. For me I'll often pick up what I call "shiny cover novels". You know the ones I'm talking about. T he novels that you can pick up in drugstores or airports or on the bestseller walls of big box bookstores like Indigo or Barnes and Noble that have shiny embossed titles and eye-catching covers. The genres vary wildly - romance, murder mysteries, serial killer/ horror, sci-fi - but the ones that I like the most are the ones that throw all these genres into a blender and come up with one glorious and totally preposterous plot. These novels aren't Dostoyevsky by any stretch. Usually the characters are two-dimensional, the prose flat or totally purple, and the authors can rarely tie-up all the narrative threads that they weave for themselves, but it doesn't matter. "half the fun is getting there" says the old adage, and in the case of these novels sometimes more than that. They're simply designed to keep you turning pages, guessing what will happen next, and in the end they kill time. Why would I mention them here, though? Because there is no closer parallel to Yukihiko Tsutsumi's "20th Century Boys", the first of a trilogy of films based on Naoki Urasawa's near future conspiracy manga, than these empty, guilty pleasures.

Taking a page from one of the founding fathers' of the "shiny cover novels", Stephen King, and his books "It" and "Dreamcatcher", Urasawa based his manga around a group of friends whose childhood world of make believe becomes frighteningly real when they're adults. Starting out as a story told to an imprisoned manga artist six years in the future the "First Chapter", as Tsutsumi's opening film in this trilogy is called, jumps back and forth in time from 1969 to 1997 and onto the turn of the millennium. At the center of it all is Endo (Toshiaki Karasawa) a former rock star who's been reduced to helping run the family convenience store. If that doesn't sound bad enough he and his elderly mother have been saddled with the job of taking care of Endo's infant niece, Kanna. It turns out that her mother abandoned her to follow a strange new religious cult called "The Friends". Add to that that Endo has been invited to his high school reunion and let's just say he's not feeling very good about his life. 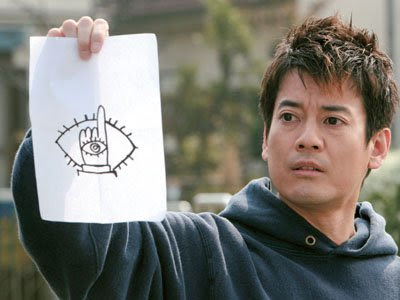 It's at his reunion that he reconnects with his group of childhood buddies: Yoshitsune (Teruyuki Kagawa), a photocopy machine salesman who's just as much of a geek as an adult as he was as a child, Maruo (Takashi Ukaji), a hefty fellow who now runs a stationary shop, or as he calls it "a fancy shop", Mon-chan (Takashi Ukaji), who's now a successful businessman in Germany, as well as Fukube (Kuranosuke Sasaki) and Nobuo (Toshikazu Fukawa) two fringe members of Endo's boyhood group. The initial awkward conversations between these long separated friends quickly gives way to more serious matters. Many people who should have come to the reunion are no shows. It turns out that more people than Endo's sister have been dropping out of society to join "The Friends". What's really disturbing to these old classmates is that the symbol used by this shadowy cult, a pointing hand with an eye at its center, is the same symbol that they used as a banner for a story they made up as children, a story about an evil organization who is bent on world domination and who will use death and disease to attain their goal.

Could "The Friends", who are headed up by a masked leader simply called "Friend" have some special knowledge of the story that Endo and his pals made up as children? Could "Friend" be a masked boy who used to hang around their secret hideout, or could he be a boy named Otcho who grew up to possibly fake his own death? Is the Ebola-like virus that is killing people in different cities around the globe somehow connected to the cult? And why was another boy from Endo's youth nicknamed Donkey who grew up to be a scientist mysteriously killed? One question piles up on top of another, one enigma begats three others and so on and so forth. For any fan of a good mystery there is no better film than "20th Century Boys", but for filmgoers who are looking for a film that makes sense, well... that's something else entirely.

Why does Endo have such a hard time remembering anything that happened when he was a boy? Did he burn out too many brain cells living the life of a rock star? He repeats the last word in so many sentences in the film, rephrasing them again and again as a question that it almost becomes laughable. Takako Tokiwa's portrayal of Endo's childhood sweetheart Yukiji is entirely one note with her again and again standing with her hands on her hips, a grown up tomboy who can hold her own with the guys. The rest of the supporting cast don't fare much better, but in the end I found myself forgetting or forgiving these obvious shortcomings. Halfway through "20th Century Boys" all I cared about was how Yukihiko Tsutsumi and the team of screenwriters headed up by Naoki Urasawa himslef were going to baffle me next. Do I think that even half of the mysteries in this first film of what is being touted as the most expensive film trilogy in Japanese cinema history will be brought to any kind of satisfying conclusion? Probably not, but like those novels with shiny covers at the drugstore it doesn't really matter. "20th Century Boys" did it's job and killed 142 minutes and it left me waiting anxiously for its "Second Chapter".
Posted by Chris MaGee at 5:59 PM