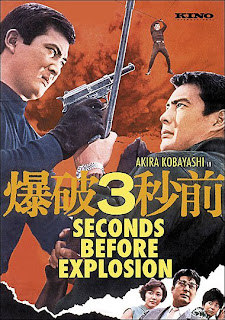 Similar to Kino's other recent release ("Detective Bureau 2-3: Go To Hell Bastards!"), Tan Ida's 1967 thriller "3 Seconds Before Explosion" is a fast paced, colourful and completely entertaining story of undercover spies and gangs with lots of stylish violence. With several layers of spies acting on behalf of three separate groups attempting to recover some precious gemstones, Ida's film has a larger focus on the plot than on the striking visuals and stylish technique, but it still contains both of those as well. Fortunately both of these Nikkatsu Action treasures (with a couple of the best film titles ever) never let up on the entertainment.

The film opens with a roughly 2 minute long sequence of our hero Yamawaki being tortured - piercing tones and flashing bright lights are assaulting his senses and it looks like he's about to crumble. He's attacked by a knife-wielding man and just as he's ready to kill him (at the encouragement of a disembodied voice), the "test" comes to an end. It's been a training exercise to see if Yamawaki can not only withstand incredible stress, but also follow orders - to see if he could actually kill if directed. He's now passed his final test and is officially considered a special agent for the secret crime fighting bureau. 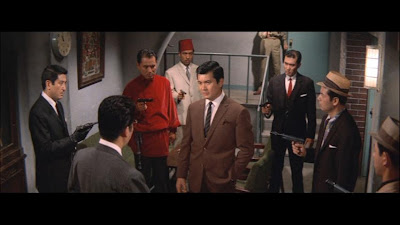 He's assigned to track down and recover the gemstones. Through complicated legal reasons, the gems change ownership to whoever has possession of them on a certain date at 6:00AM. So obviously, there are competing interests in acquiring the stones. Yamawaki goes way undercover to infiltrate the gang known to have the gems, but he encounters several issues. First, the gang don't trust him easily. Secondly, there are already spies within the gang feeding information to another gang who also want to get their hands on the jewels. Further complicating matters is the fact that his former colleague and equally well-trained spy Yabuki, is now working for the gang looking to grab the gems. Of course, the two old friends respect each other, but vow that they will kill in order to get the gems.

Though not as openly silly at times as "Detective Bureau", the fun factor kicks in with the brisk pace of the story as well as Yamawaki's inventiveness and use of little gadgets. He's always ahead of the rest of the gang leaders and the assorted henchmen clogging up each scene (there are more henchmen per square foot in this film than most) and manages to retain a cool detached persona. Even the Chinese female escort attempting to seduce information out of him can't crack a smile on Yamawaki. Yabuki on the other hand is a bit more emotional and quick to temper - perhaps because his girlfriend is in the rival gang and providing information back to him. The women in this world, by the way, don't typically fare very well...My impression has always been that this is more a direct correlation to the real societal issues women had to deal with at the time than any kind of misogynistic exploitation, but whatever the case, it certainly jumps out at you. So even while you're enjoying a good solid genre film packed with action and tension, you can still be made to ponder a few things. Even 40 years later.

Read more from Bob Turnbull at his blog.
Posted by Chris MaGee at 3:29 PM