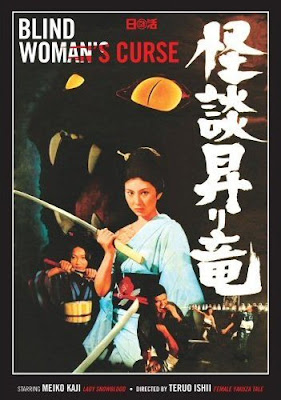 Teruo Ishii is primarily known for his Ero Guro films, for being the godfather of Japanese cult film, a man with a deep love of Edogawa Rampo, who adopted his tales numerous times. But there’s more to him than the sometimes erotic, often surreal and typically grotesque imagery that is found in his more well known films such as "Shoguns’ Joys of Torture" and "Horror’s of Malformed Men". He was a man who delved into numerous genres, having an incredibly diverse career, exploring such genres as the criminal underworld with "Abashiri Prison", children’s science fiction with "Super Giant", comedy with the "Hot Springs Geisha" series, film noir with "Sexy Chitai" and even biker films with "Detonation! Violent Riders" and "Detonation! Violent Games". He was one of the first Japanese directors to bend the genre’s to such extremes, that they became more than the sum of their parts, and in the process, influenced a slew of future mavericks, most notably Takashi Miike.

"Blind Woman’s Curse" is at its core a yakuza film. Akami Tachibana, played by the gorgeous Meiko Kaji, is imprisoned after a turf war, and upon release, struggles to rebuild her gang. Of course her rivals want revenge for the beating they took, and the death of their boss at the hands of Akemi, and they set out on a spree of violence and vengeance. If this were not a Teruo Ishii film, the story would end there. However, this is a Teruo Ishii film, and every aspect of the yakuza film is turned on its head.

First, he makes the main protagonist, Akami Tachibana, female, as well as the primary antagonist, a Zatoichi inspired blind swordswoman who seeks vengeance on Akami. Then, he injects it with small bursts of comedy; most notably by having one of the heads of a rival gang dress is in a flamboyant, ass baring outfit reminiscent of Malcolm McDowell in "A Clockwork Orange". These two elements completely undermine and deconstruct the typical masculine, machismo undertones typical of a yakuza film. Finally, and the true stroke of genius, is that it’s also a horror film. Whose stroke of genius is really up for debate; Meiko Kaji claims it was Ishii’s idea, while he insists it was something the studio suggested. Either way, it’s brilliant. During the initial gang war, shot beautifully in slow motion, Akami ends up blinding the younger sister of her rival (did this inspire John Woo’s "The Killer" perhaps), and a sinister black cat laps up the blood spilled from the wound. From that point on, this black cat haunts Akami. Her men become possessed by a demonic cat spirit. Akami herself has strange visions and nightmares of the hellish beast, the guilt constantly plaguing her. And if that wasn’t enough, there’s also the dancing Butoh slave, played by Tatsumi Hijikata from "Malformed Men", who is part of the same traveling freak show that the blind swordswoman belongs too. He of course has a penchant for skinning women alive and collecting their hides!

In the hands of most, I’m sure "Blind Woman’s Curse" would have collapsed under its own weight, but under Ishii’s direction, it somehow manages to flow smoothly and is setup so beautifully in the first ten minutes, that nothing feels forced or contrived. Without this venture into yakuza horror territory, films like "Gozu" would not exist, nor would other Miike films which seek to deconstruct the classic yakuza mold like the Dead or Alive and Ichi the Killer. Even Shinya Tsukamoto infusion of dance into such films as "Vital" and "Gemini", with its acrobatic doppelganger, seem strangely reminiscent of Tatsumi Hijikata’s Butoh performances. While I’m sure "Blind Woman’s Curse" perplexed many, it helped sky rocket Meiko Kaji into stardom, this being her first starring role, and it helped lay the groundwork for the mavericks of today.

Read more by Matthew Hardstaff at his blog.
Posted by Chris MaGee at 3:29 PM