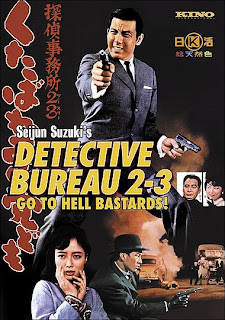 Rat-a-tat pulsing snare drums blast out of the speakers, scantily clad dancers jiggle around a Christmas tree and Jo Shishido smirks while holding a large machine gun like weapon...And that's just the menu of the DVD. Even better is that "Detective Bureau 2-3: Go To Hell Bastards!" delivers fully on this immediate promise.

Done around the time that director Seijun Suzuki began pushing his boundaries, but before he abandoned the idea of straight narrative, Kino's recent release of this 1963 Nikkatsu "detective infiltrates gang" story moves at a good clip. By giving just enough information to the viewer, the film keeps you in the loop, but also forces you to always be on your toes if you want to stay there. Because of that, it seems hardly worth it to describe the plot - it's doesn't really matter to a certain extent and there's nothing revelatory about it - so just know that you'll get gun battles, women in distress, tough talking yakuza, operatic death scenes and a jazzy, 50s rock 'n roll score. The key to the film is in its presentation. Things like visual cues, lighting schemes and character framing are always giving additional information while the quick pace, great looking colours, broad acting and the music firmly state - above everything else - that there's a sense of fun that will last throughout the movie. 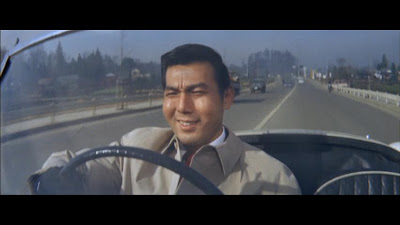 To give some grounding to the story though, Shishido plays a detective offering his services to the local police. There's been a gangland mass slaying with a single surviving witness and Shishido thinks that he's the right man to go undercover. Shishido plays it ultra-cool (and drives a wickedly great little white sports car), but not so much that he can't do some additional mugging on occasion for the camera. He even participates in one of the four musical numbers that crop up during the various club visits made by the gang members. Through some of this goofiness, Suzuki manages to gently poke some fun at the genre itself while also using many of its own conventions.

Another distinguising characteristic of many of these films is the ability to sneak in some cultural commentary amongst all the schizophrenic goings-on. Whether it's the American style music, the large U.S. planes the camera lingers on as a car drives by the airport or many of the tropes of American crime thrillers being reused (and also slightly mocked), there's a definite sense of a struggle to find where Japan's own identity fits in. To do that while also stretching (and even redefining) a well-worn genre and keeping an audience highly entertained is a pretty grand feat. My appreciation of Suzuki continues unabated...

Read more from Bob Turnbull at his blog.
Posted by Chris MaGee at 3:51 PM