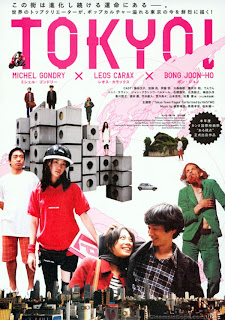 It's interesting how the major cities of around the globe have taken on nearly mythic personæ in the minds of the world's populace, as if they were a part of some kind of urban collective unconscious. While New York City is thought of as the defacto world capital being the home of the U.N., the Statue of Liberty and "Give us your tired, your poor, your hungry, your huddled masses..." it's also taken on the character if not of a place of villainy then certainly of danger, street crime, a pragmatic toughness, and brutal honesty. Meanwhile a city like Paris stands as a landmark to romance and Old World traditions, it's 19th-century status as hub of painting, music, and fashion carrying over to the present day giving it an air of refinement and culture, albeit served up with a certain remove and rudeness. But of all the world's capitals none captures people's imaginations quite like Tokyo does. Maybe it's because of its grounding in traditions that seem strange or sometimes directly opposite to our way of Western thinking, or how it sprung glittering with neon and chrome from the rubble of WW2, but for people around the globe Tokyo represents the future, be it utopian or dystopian, a place of crushing conformity and congestion, but also of cutting edge technology and baffling pop culture. Of all the major cities Tokyo is probably the one that lends itself best to the wild imaginings of literature and cinema, so it was no surprise that three of today's most visionary directors joined forces to present stories set in this megalopolis. "Tokyo!" brings together Michel Gondry (Eternal Sunshine of the Spotless Mind, The Science of Sleep), Leos Carax (Pola X, The Lovers on the Bridge), and Bong Joon-ho (Memories of Murder, The Host) all of whom take the city of Tokyo as a starting point to explore relationships, loneliness, and belonging, with only Carax daring to hit the nerves of Japan's wartime past and insular society. 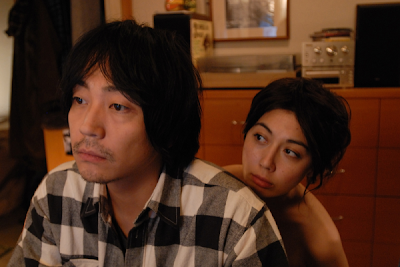 Gondry starts things out with "Interior Design", a story that really could have been told in any urban setting, in fact Gondry based his film on a sort comic by artist Gabrielle Bell titled "Cecil & Jordan in New York". Boyfriend and girlfriend Akira (Ryo Kase) and Hiroko (Ayako Fujitani) have stuffed their car with all their belongings and have made the move to Tokyo in an attempt to get Akira's burgeoning film career off the ground. They stay in Hiroko's friend Akemi's cramped apartment while they look for a place, but as most struggling young couples know finding a decent place to live in the big city (be it New York, Paris, Tokyo... or even Toronto) is often as difficult as finding a palm tree in the Arctic. Each day they scour the rental ads to no avail. Akira and Hiroko have entered into a world of boxes: small cubicle apartments in rundown buildings are juxtaposed with the boxed gifts that Akira gift wraps at his day job in a department store; and it's in this world that their relationship begins to fall apart. As Akira gains a handful of fans for his art film with a capital "A" Hiroko feels more and more marginalized, someone without a vocation, without a home, without a purpose. Her depression is depicted using some startling visual effects as she stumbles through the streets transforming limb by limb into a wooden chair. Instead of being a symbol of stasis though Gondry turns things around, having Hiroko being taken into the apartment of a musician, played by Nao Omori (Ichi the Killer, Vibrator) and finding humour, joy and purpose in her new life as a piece of furniture. 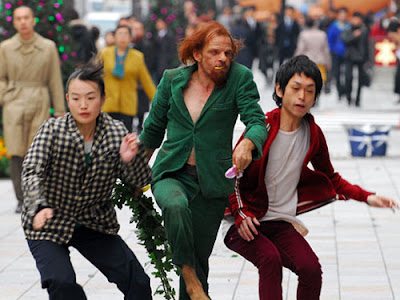 After the strangely happy ending of Gondry's "Interior Design" Leos Carax keeps the laughs coming, at least for a time, with his contribution "Merde" which asks the question, "What would a modern day Japanese monster movie look like?" Instead of resorting to a parody of the men in rubber suits that crushed scale models of Tokyo in Toho's kaiju films of the 50's and 60's Carax uses the dying art of comedy as social satire to poke fun at Japan's insular society and general fear of gaikokujin . When a filthy, red-haired, half blind foreigner crawls out of the sewer in downtown Tokyo and proceeds to break every rule of polite society (knocking pedestrians over, licking young womens' armpits, stealing people's wallets and eating their contents) the Japanese react just as they would if Godzilla were tramping through the city. Carax drives this point straight home by employing Akira Ifukube's iconic theme music for Ishiro Honda's "Godzilla" throughout "Merde". The mood shifts somewhat from comic to tragic though after this grotesque man, played with horrific glee by French actor Denis Lavant, hauls a supply of grenades from a stash of WW2 era weapons from Tokyo's underground and proceeds to use them on the city's innocent populace. SWAT teams are sent into the sewers and this man, known simply as Merde, or "Shit", is taken into custody and put on trial. To discover what this creature's motivation for killing Tokyoites might be a French lawyer (Jean-François Balmer) who bears a striking resemblance to Merde is flown in to communicate with him. While Carax plays with Japan's contentious relationship with outsiders he also paints a naughty stereotype of his countrymen. Denis Lavant's curled goatee, abysmal personal hygiene and surreal diet of flowers and cash that would make André Breton proud are an utterly un-PC cartoon of the French. 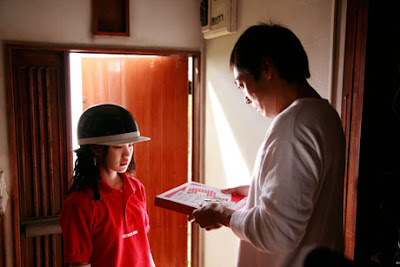 Tying off "Tokyo!" is Bong-Joon-ho's "Shaking Tokyo" a sweet film that employs the phenomena of hikikomori, or socially withdrawn shut-ins, and the constant threat of earthquakes as symbols in a story of how love can literally bring you out of yourself and shift the very foundations of your world. Teruyuki Kagawa (Sway, Tokyo Sonata) plays a man who hasn't left his home in a decade. He never liked the fast pace and jostling of the crowded streets, the sunlight made him feel ill, so his apartment has become it's own little hermitage where everything has it's proper place and he can fall asleep on the toilet with the door wide open without any sense of indecency. Besides, in the age of the telephone and internet there's not need to leave the house anyway. Food and supplies can be brought to his door, and as a weekly treat he orders in pizza, but never ever makes eye contact with the delivery person... that is until one day when the delivery woman, played by Yu Aoi (Hana and Alice, Hula Girls), speaks to him. Eyes lock, the ground shakes beneath their feet, and she faints dead away. Kagawa's character must deal with another human being for the first time in ten years, and a beautiful one at that. When the next Friday roles around but she doesn't return to deliver his pizza the hikikomori must make the decision to forget her or to make the momentous step of leaving the solace of his apartment to seek her out. "Shaking Tokyo" is definitely a crowd pleasing finale to the trio of films that make up "Tokyo!", but I felt that Bong Joon-ho could have passed on having a series buttons tattooed onto Yu Aoi's body marked "Sadness", Heartbreak", and "Love" were a bit heavy-handed. The film wouldn't have lost anything if they had been left out.

While all the stories in "Tokyo!" suffer a bit from the foreigner's perception of the city as some kind of exotic "other"-land that I mentioned above I never got the feeling that Japan or the Japanese were being disrespected or unduly caricaturized during any of the three films, even during the Carax's pointed social commentary in "Merde". Add several cameos by high profile Japanese talent (Naoto Takenaka, Renji Ishibashi, Satoshi Tsuabuki, and YoshiYoshi Arakawa) and "Tokyo!" represents a highly creative, funny, sweet and original movie-going experience for both fans of Japanese film fans and film fans alike.
Posted by Chris MaGee at 3:37 PM

What would you do if you failed? Many people may choose RuneScape Gold to give up. However, the Runescape Money surest way to success is to keep your Sell RS Gold direction and stick to your goal.

You can try to write your objective Sell Runescape Gold on paper and make some Sell RS Gold plans to achieve it. In this way, you will know how to arrange your time and to spend your time properly. And you should also have a Sell Runescape Gold belief that you are sure to succeed as long as you keep your direction all the time.