Tsurisaki Kiyotaka: Chronicler of the dead 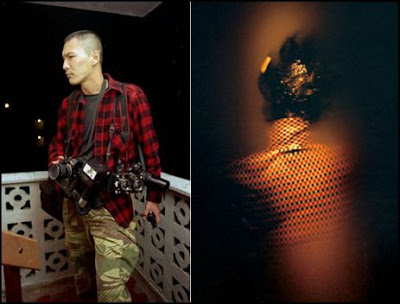 Although the work of Tsurisaki Kiyotaka is singular in its subject matter it’s somewhat difficult to categorize. You see the 43-year-old photojournalist and documentarian has spent 15 years traveling some of the world’s most dangerous locales to photograph and film the dead. While it would be easy to write off his output as some kind of morbid, sensational, and almost pornographic celebration of death and gore it can also be appreciated as an important examination of how we as a society have become removed from the notion of our own mortality. Frankly, I sit firmly on the fence and can see both viewpoints, but continuing the maxim of the J-Film Pow-Wow to highlight the widest variety of Japanese film culture I thought that I’d do a brief write up on Kiyotaka and leave it up to you to decide on the validity of his work.

As a teenager growing up in Toyama Prefecture Kiyotaka made short amateur films, but despite his early cinematic ambitions he ended up studying literature at Tokyo ’s Keio University . Upon graduation, though, he’d make a return to filmmaking, albeit pornographic filmmaking, as a way to help pay the bills. In the early 90’s Kiyotaka began to transition away from the world of adult video and into photojournalism, being sent to such places as Thailand , Palestine , and the former Soviet Union on assignments. It was while he was covering these volatile, war torn regions that he was first exposed to death in all its ugly variety. By 1994 Kiyotaka was photographing the dead full time and by 1995 he held his first solo show at Tokyo ’s NG Gallery. In the years since then he was photographed over 1,000 corpses as well as directing the 2005 documentary “Orozco el embalsamador” that chronicled the life and work of Bogota, Colombia’s oldest working embalmer, as well as a series of short film which he calls “Junk Films” which screened in the “Time and Tide” programme at the 2008 Rotterdam International Film Festival.

Far from being entertainment (I wouldn’t want to meet anyone who thought of these films as entertainment) Kiyotaka’s work make's question our reality and our attitudes towards it, and I can think of no other subject that best does that then the inevitable and non-negotiable time of our deaths. As he put it in a statement made shortly after the release of “Orozco el embalsamador” and then I’ll let you discuss your thoughts on his work in the comments: “Though I have traveled the world and observed death for over 10 years, I have never grasped its reality; I can only understand death materially. I have found however, that the path from the living to the dead indicates the most precious human virtue: dignity.” Then again, to play the devil's advocate, I question how much "dignity" Kiyotaka affords his subjects if he puts some of his photographs on t-shirts sold at his official website. Thoughts?

Below is the trailer for "Junk Films: The Collected Short Shockumentaries Of Tsurisaki Kiyotaka" that screened at Rotterdam in '08. Nothing terribly graphic, but a word of warning to anyone who may want to explore Kiyotaka's work further: the vast majority of it is NSFW.