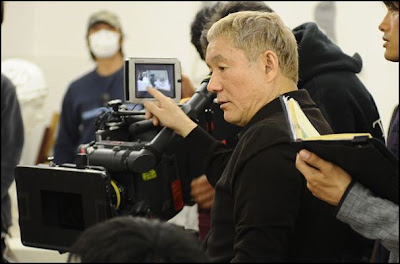 Most of you know that I'm a big fan of the films of Takeshi Kitano. Kitano's 2002 film "Dolls" was the major impetus for me to delve deeper into the world of Japanese cinema, so in a way we have to thank him for what eventually became the J-Film Pow-Wow. I'm not an unconditional fan of Kitano's though. As much as his films "A Scene at the Sea" and "Kikujiro" stand amongst my favorites of all time his recent output has tested the patience and the sensibilities of both diehard fans like myself and general movie audiences as well. Far from writing him off entirely I find myself continually intrigued by Kitano, and it was one a search through YouTube this week that I came across this 24-minute exclusive interview that CNN Asia conducted with the filmmaker/ actor/ comedian/ TV host/ author just after the release of his most recent film "Achilles and the Tortoise" last year. Fanatics may not get that much new information about Kiatno from this piece, but those who may just be getting into his filmography should learn a lot from this indepth chat.
The interview is broken into three chunks, the first being embedded below while the two subsequent parts can be found by clicking here. Enjoy!