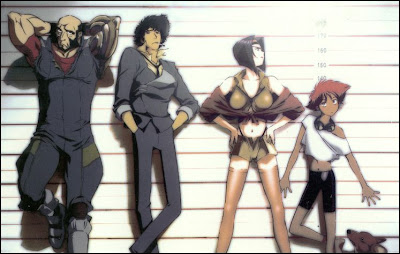 At the beginning of the year the official word came down from 3 Arts and producer Erwin Stoff that Keanu Reeves would be starring as Spike Siegel in a live-action Hollywood remake of Shinichiro Watanabe's "Cowboy Bebop". Anime and Japanese pop culture fans shuddered even after Reeves and Stoff insisted that they were going to remain as faithful as possible to the original story of bounty hunters aboard the spaceship Bebop, and that Watanabe himself would be playing a crucial part in the production. I, like a lot of you, was sceptical, but now an extensive interview with the remake's screenwriter, Peter Craig, has been posted at AnimeVice.com in which he confirms Watanabe's involvemnt in the project.

Craig attended a meeting about the remake in Tokyo in December with Stoff, Reeves and Watanabe in attendance and apparently in went very well, "I thought there was an immediate rapport between all of us," Craig says, "particularly Shinchiro Watanabe and Keanu." The result of the meeting was a very detailed set of ideas and instructions from Watanabe and his crew that Craig has "consulted regularly" while completing the first draft of the screenplay.

If you're a fan of "Cowboy Bebop" then follow the link above to read the full interview. It's well worth it... and thanks to Anime News Network for pointing the way to it.
Posted by Chris MaGee at 4:51 AM