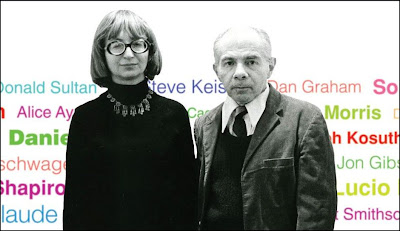 Documentary filmmaker Megumi Sasaki first learned about Herb and Dorothy Vogel when she was working on a piece about environmental artists Christo and Jeanne-Claude for Japanese television. The conceptual drawings and supporting material for the artists' large scale projects in which they'd wrap major architectural landmarks in fabric all came from the Vogels, Herb a postal clerk and Dorothy a librarian. The couple had spent decades living solely off of Dorothy's meager salary while Herb's entire pay cheque would be devoted to their one great passion: contemporary art. In the 1960's the artists such as Sol LeWitt, Chuck Close, Richard Tuttle and Christo and Jeanne-Claude were virtual unknowns, but the Vogel's saw something in their work so they began to purchase as much of it as they could and they haven't stopped since. In the early 90's their small one bedroom apartment had priceless drawing and paintings stacked up like cord wood, so they ended up donating to the National Gallery of Art in Washington, DC. Sasaki knew immediately that she wanted to tell the Vogel's remarkable story as a way to let people know that "Art is not limited to the elite few. You don't have to be wealthy or an art school graduate to enjoy art."

The Vogel's story and its message of pursuing your passions regardless of income or education is definitely an inspiring one, and it's earned Sasaki's documentary "Herb & Dorothy" the Audience Award at the Silverdocs Film Festival, the Philadelphia Cinefest, and the Hamptons Film Festival, and as of today it's getting a theatrical release in New York City. If you're in the Big Apple make sure to seek it out, and if you're not then at least check out the film's official website and trailer below.