REVIEW: I Live in Fear 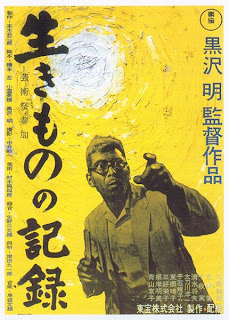 As years go by, few films manage to maintain the same social impact they did upon their initial release, let alone over a span of half a decade. The paranoia that surrounded the atomic bomb tests performed by the US in the 1950’s and the cold war that soon followed permeated many films, from Alain Renais’ "Hiroshima Mon Amour" to Stanley Kubrick’s "Doctor Strangelove". And while that state of fear has changed, it definitely hasn’t subsided. Instead it’s been transposed, from weapons of mass destruction to suicide bombers and terrorists armed with nothing more than box cutters and the will to cause as much death as possible. In 1955 Akira Kurosawa created a film that manifested all the fears and post-war paranoia so succinctly that even today, the ramifications are still just as startling as they were 54 years ago.

"I Live in Fear" stars Toshiro Mifune as Kiichi Nakajima, the patriarch of a rich industrial family. Stricken with the fear that nuclear fallout could wipe out Japan at any moment, he desperately pleads with his family to move to Brazil, to escape the coming disaster. His family, use to the lavish lifestyle their fathers business has afforded them, refuses to do so. When Kiichi insists, making plans to sell the family business, his children, with the help of their mother, move to have their father deemed mentally irresponsible by a family court, there by relieving him of his financial power of the family company. Soon a group for judges, headed by a family dentist played by Kurosawa regular Takashi Shimura, must decide what to do. Choose to let the father relocate his family to a foreign country to save them from his perceived notion of doom, or take away everything he’s worked for, so that his family can be happy. 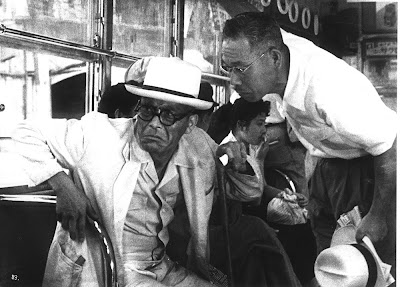 It goes without saying that stylistically "I Live in Fear" is an incredibly well made film. Made the year after Seven Samurai, Kurosawa is definitely at the height of his game here. What should be noted is how well he manages to keep the film completely impartial. Mifune’s brilliant performance (he was playing a man twice his age, and fills the role completely) is exudes such compassion for his family, that it’s hard not to feel that what’s compelling him has some semblance of sanity. He may be mad, but he’s acting in a completely selfless manner. On top of that, he seems to be the only one who reacts to the constant barrage of warning sirens and jets flying overhead, while everyone else seems oblivious. And his plan is so thoroughly thought out, how could he be that insane? And yet his family, despite the fact that they want to stay because they don’t want to leave the lifestyle they’ve grown accustom to, and are completely oblivious to the fear their father had to endure during the war, have valid points as to why his plan will fail, most notably of which is, if there is nuclear fallout, there are enough nuclear weapons to destroy the planet, not just Japan. But Kurosawa never judges, only depicting each side as they are, right or wrong. This is cinematically achieved to perfection in a scene in which the judges read the families indictment of their father, the written summary superimposed over the top of the family members, the lines on the paper creating prison bars over each of them, locking them in to the prison of madness from which they will never leave. Because in essence, that’s what the film is really about. Both are right. Both are wrong. Both are mad and bound to that madness for the duration.

It could be said that Takashi Shimura’s Dr. Harada is the eyes and the ears of the film, seeing both sides of the story. On the one side you have a man who’s looked into the abyss, to see what fear really surrounds his society, and it tears him apart. And on the other, you have a society of complacent, ignorant people who choose to ignore the violence and pain of what could happen and subsume them selves in a world of material excess. Has anything really changed?

Read more by Matthew Hardstaff at his blog.
Posted by Chris MaGee at 3:24 PM