Akira Ogata and cast announce the completion of "Non-chan Noriben" 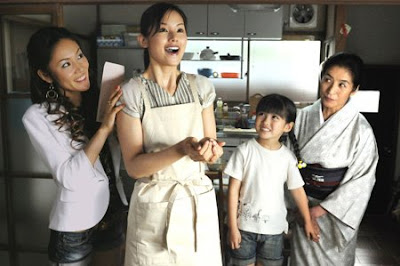 I am a huge fan of filmmaker Akira Ogata. Having worked as an assistant director on such in your face films as Sogo Ishii's "Crazy Family" and Katsuhiro Otomo's live-action "World Apartment Horror" you'd think that he'd carry on the tradition and create equally provocative work as a director, but nothing could be further from the truth. Ogata made his directorial debut in 2000 with "Boy's Choir", the delicately told tale of two teenagers discovering their true voices while singing in a choir at a rural boy's school, and followed it up in 2005 with 'The Milkwoman", about a lonely spinster who delivers milk in a seaside town who gets involved with a married man. Simple stories, but both possessing deep emotion and profound meaning, something that few films whether from Japan or elsewhere, can lay claim to doing. So last year when Don Brown of Ryuganji.net told me about Ogata's upcoming third feature film "Non-chan Noriben" I was obviously excited. the only problem was that there was very little advance news or buzz surrounding this story of of a down-on-her-luck single mother who finds purpose in her life after discovering saba no miso-ni (mackerel simmered in sweet miso) based on the manga by Yoshikazu Irie, just a few stills here and a few plot snippets there. Now, ll of a sudden there comes the announcement that "Non-chan Noriben" has completed production and will open in Japanese theatres on September 26th. On Tuesday Ogata and his two leading ladies, Manami Konishi who plays Komaki, the 31-year-old mother, and 7-year-old Rio Sasaki who plays Komaki's daughter. After the announcements Little Sasaki got to step up to the mic to read a letter she wrote to her onscreen mother about how she grew to feel that Konishi was her surrogate mother while they were on set. (You can check out highlight of the press conference care of Asahi.com and Youtube below.)

Despite a thorough search I haven't seen a trailer for "Non-chan Noriben" pop up online just yet, but I'm sure it's right around the corner. Keep checking back because I'll definitely post it. Thanks to CinemaCafe.net for pointing the way to this story.

UPDATE: All good things come to those who wait, but that's what I didn't do. I should have known better, and the day after I posted this story Nippon Cinema snagged the theatrical trail for "Non-chan Noriben". Not what I would normally think of when I think of Ogata, but I have faith. Plus, it's great to see Ittoku Kishibe starring again after his fantastic performance in Ogata's "The Milkwoman". Check out the trailer for "Non-chan Noriben" here.
Posted by Chris MaGee at 3:26 PM