REVIEW: The Bird People in China 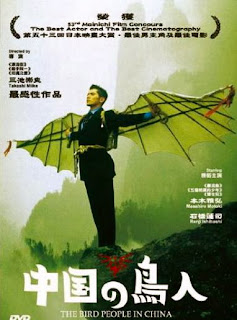 Takashi Miike is without a doubt one of Japan ’s most unique filmmakers. Yet even with an immense body of work covering several different genres, people sometimes forget just how versatile a director he is. Even when acknowledging films as diverse as "Ichi the Killer", "Visitor Q" or "Audition", they too often focus almost exclusively on their “extreme” elements while unfairly labeling him as a provocateur. Fortunately, part of Miike’s wildcard quality is how he can control and occasionally break away entirely from that image of himself, be it in certain passages in his extreme works (remember the important, eloquently constructed family relationships in "Dead or Alive" and "Visitor Q") or in separate films altogether. A strong example of the latter is "The Bird People in China".

The film begins with a whirlwind of storytelling bravura as Wada, a young salary man (played by baby-faced "Departures" star Masahiro Motoki), explains his current assignment, his backstory illustrated by a barrage of images played in fast motion. He is traveling through China in search of a valuable vein of jade, steadily making his way across the country by various (and sometimes hazardous) means. He is soon joined by Mr. Ujiie (Renji Ishibashi), a hilariously volatile yakuza set on collecting an outstanding debt for his boss. As the two unlikely heroes make their way through the Chinese wilderness (eventually traveling up a river on a raft pulled along by turtles), they are battered and tested by the elements before finding a village hidden from the rest of civilization whose inhabitants are being taught how to fly by a mysterious young girl. Soon the travelers’ attention shifts from the vein of jade to translating and understanding a collection of old texts that may hold the secret of the bird people. 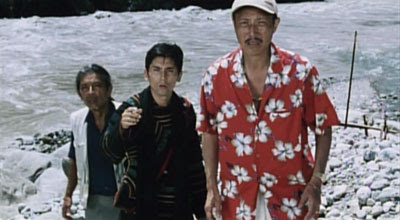 Initially, unsuspecting Miike fans should find themselves in familiar territory. Along with the rapid-fire exposition (one of the director’s frequent flashes of cinematic inventiveness), the film contains his recognizable brand of eccentric humor, shown most often through Mr. Ujiie’s abusive treatment of Wada. However, it eventually gives way to deeper stuff as the arcs of the two men’s journeys are further revealed, becoming one of Miike’s most thoughtful efforts. One could easily describe "The Bird People in China" as his great philosophical quest film; his "The Alchemist", but without any of the canned Hallmark wisdom that would usually accompany such a venture. It certainly contains more Conrad than Coelho, delving into dark regions of the human psyche and making its passengers (both onscreen and off) all the wiser for it.

Spanning several cultures and laden with breathtaking images, "The Bird People in China" is an enchanting spiritual adventure and a great surprise from Takashi Miike. While it contains some yakuza-related content, it is completely unlike anything one might dare to expect from the idiosyncratic filmmaker. Those who know him best (or only) for his hyperactive stylization and disturbing graphic violence owe it to themselves to give this one a chance.

Read more by Marc Saint-Cyr at his blog.
Posted by Chris MaGee at 3:12 PM