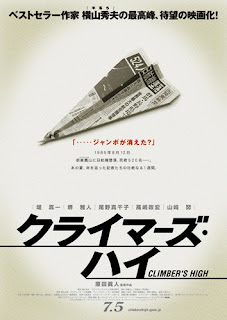 The title of Masato Harada's latest film is in reference to the feeling of exhilaration a mountain or rock climber can get while moving toward the end goal of reaching a summit. Though the film opens with two rock climbers discussing a particular rock climbing route dubbed "The Partition", there is in fact very little actual climbing footage or even story in the film. This is really a story of a newspaperman, the press room he works in and the coverage he led of the biggest single airplane disaster ever - the crash of JAL Flight 123 in 1985 that killed 520 people.

So why the climbing reference? During that opening scene we meet both Yuuki (played with sad-faced determination by Shin'ichi Tsutsumi) and his friend Anzai as they discuss plans to scale The Partition later that Summer. Those plans, though, fall apart just as both are getting ready to depart for the climb. Yuuki is assigned to run the JAL desk for the paper after the crash and Anzai falls into ill health and slips into a coma. The remainder of the story is very much focused on Yuuki's coverage of the crash story - how he assigns his reporters, which pieces of the crash story should get headlines and how they can get the scoop on the cause of the crash - as well as bits of his personal life and estrangement from his young son. This entire storyline is punctuated with flash-forwards to 2007 as an older Yuuki goes about preparing and climbing The Partition with Anzai's son. The trek of the climb - it's early easy stages, the difficult portions that need teamwork, the slips and the heads down hard work - mirror the battles Yuuki faces reporting his story through a hectic week long period. 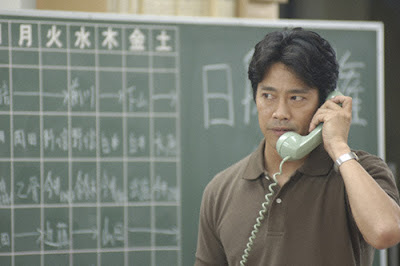 The climbing metaphor is solid, but this is through and through a newsroom movie. We see the internal workings of a newspaper as headlines are composed, layouts get arranged on paper (this was 1985 so computers hadn't made their way into the newspaper publishing equation yet), editorial discussions are held of the most newsworthy items and lots of people yell. There's in-fighting amongst the staff, the publisher, the editors, the circulation boss (the only major flaw in an otherwise very solid acting ensemble) and of course Yuuki himself. Both internal political issues as well as external ones arise (how do you properly evenly cover the current and former prime minister being in the same location?), but Yuuki never loses sight of how he thinks he can best address a terrible disaster. The film never forgets that it is wrapping this entire story around a real event - the screenplay was taken from Hideo Yokoyama's novel of his own time at a newspaper - and never treats it lightly. Though the film tries to push the emotion a bit forcefully sometimes with its music choices, there are some very effective and honest scenes dealing with the real human tragedy that occurred - in particular one where the staff read a young reporter's first hand account of being at the crash site.

Harada manages to keep everything moving at a fast rate (even though the film is a bit overlong at 2 and a half hours) by constantly keeping the camera on the move. In the newsroom, on the street, in restaurants or on the mountain, the camera always seems to be looking for another angle on what's happening and the person speaking. Combined with editing that occasionally bounces around like a superball let loose in a small room, there's always a feeling that something is progressing, that different viewpoints are being weighed and that you are in the midst of swirling activity. It's not always effective - there's a scene towards the end with a young female reporter that uses the technique to incredibly distracting ends - but for the most part it captures the heightened feelings and excitement of the characters. Harada has done an excellent job at telling the story of a terrible tragedy from a unique viewpoint while also bringing us interesting and full characters. A huge improvement over his rather incoherent "The Suicide Song".

Read more from Bob Turnbull at his blog.
Posted by Chris MaGee at 5:02 PM