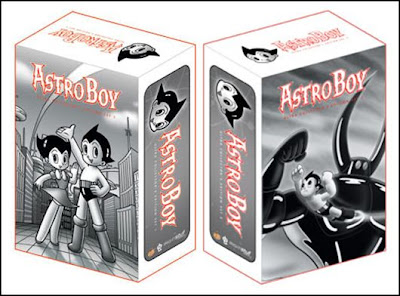 I was really surprised when I saw this news item posted at Japanator this morning talking about the brand new DVD releases of the original "Astroboy" animated TV series from Iowa-based distributor RightStuf!. With Osamu Tezuka's robot boy being one of the most iconic anime characters ever created you'd think that all 104 episodes of the series which originally aired in the U.S. throughout 1963 would have been available a long, long time ago... but apparently that's not the case!

These two box sets that RightStuf! have just put out represent the first time this landmark series has ever been released on DVD, and what amazing box sets they are! Not only do you get every episode of the series you also get one DVD full of bonus materials, an interview with series producer Fred Ladd, original character, merchandise and advertisement galleries, a booklet titled "The History of Astro Boy", a biography of Osamu Tezuka AND a Japanese episode of the series that has never been sen in North America before! Man, my fingers are getting tired just typing all that! What's great about these DVD sets is that for everything you get they're pretty reasonably priced: $129.99 per box set.

You can check out more details on the Astroboy sets at Rightstuf! here, and if that doesn't convince you to mke the investment then check out the trailer for the original English-language series below.