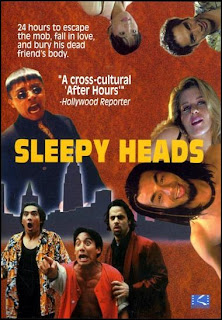 "Story is the most important thing". It's a common rule in filmmaking and certainly hard to refute. What happens though, when you have all the elements of a good story, but simply don't execute the telling of it very well? In the case of Yoshifumi Hosoya's 1997 comedy "Sleepy Heads", you end up with something pretty bland.

The entirety of the film takes place in New York City and focuses on fairly new immigrants from Japan (some legal, some not). Hiro is a failed singer songwriter who tends to act first and think later and Ken dreams of operating his own dojo but spends most of his time eating in the local Japanese restaurant (where patrons have a tendency to leave without paying). The two meet via Akira, a drug dealing friend of Hiro's from back in Japan, and all three become roommates. The floor of their apartment building is a mini-ghetto of recent Japanese arrivals to the U.S. and the story shows promise by pulling in these additional characters who all have different reasons for leaving Japan. Each of these people hasn't quite found the American Dream either, so there are several good moments that enable the comparing and contrasting of the two cultures. Keiko had issues with the male dominated culture of Japan, but ends up as an "escort" in NY with "managers" who aren't especially understanding. Ken left due to what he found was a rigid hierarchical system, but after 8 years he is still struggling to find money for his meals ("34 in the blink of an eye"). The lovely young Akiko left Japan because she didn't want the expected career of working in an office building - the exact job she has in NY.

There's a sub-plot of a possible romance between Hiro and Akiko - he meets her when she helps properly translate his ice cream order (the vendor couldn't understand Hiro's heavily accented request for "vanilla"). Though she appears to be successful while Hiro is out busking in the streets, she still is curious about him since she admires people who simply do what they want. The main thrust of the film's plot, however, occurs about halfway through - Akira ingests a pharmaceutical product called "Sleepy Heads" and his body is later discovered by Hiro and Ken. In order to fulfill Akira's desire to have his ashes thrown off the Brooklyn Bridge "like Steve McQueen", Hiro, Ken and their friend B.J. attempt to bring his body (in a long body bag and later, a garbage can) to the bridge so that they can throw him into the river. They quickly dispense of the idea of burning him, so this sets up a long night of navigating New York City via trucks, subways, ferries and on foot with a body. 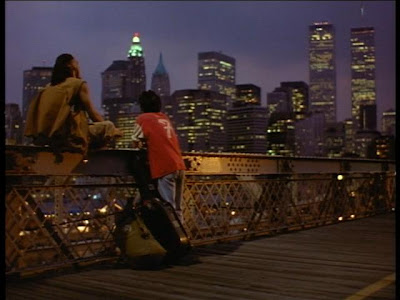 So the story provides ample room for comedic scenarios, interesting characters and cultural differences. As they pass through the different sections of New York, I was occasionally reminded of Scorsese's "After Hours", but the film simply doesn't capitalize on the possibilities inherent in its concept. And it's due to the execution. For example, in one scene Ken and Hiro struggle to exit the subway with the body bag through one of those floor-to-ceiling turnstiles, but the possible slapstick of the scene falls flat. As do most of the other attempts: a dog chewing through the end of the body bag, the body falling off a truck into the middle of the street, rolling Akira in a garbage can after they get tired of carrying him, etc. It's a combination of poor timing, the slight comedic abilities of the actors and being unable to create a solid rhythm for the story. The movie essentially becomes inert - very much like the characters as described by the film's title.

There are other issues too such as the incredibly generic music and the awful performances by the English speaking actors, but those are of secondary importance. There was a lot to like in the template for the film - the desire these people have for being in the U.S., the conflicted feelings of leaving Japan, the fascination with American culture (B.J. and Ken argue over whether McQueen or Paul Newman is more masculine) and the entire plot of transporting a body through New York City - it's just a shame that the result doesn't work. Story may be the most important thing, but it's not everything. You need to be able to tell it well too.

Read more from Bob Turnbull at his blog.
Posted by Chris MaGee at 3:13 PM