Get ready for an Olympic-sized laugh with "Tokyo OnlyPic 2008" 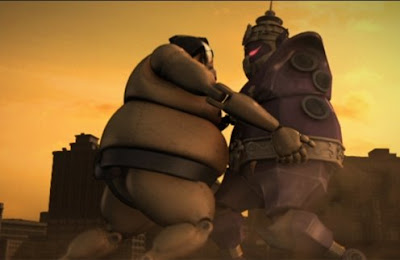 I'm not much of a sports fan, but I've sat through and marveled at Kon Ichikawa's nearly 3-hour epic documentary of the 1964 Olympic Games "Tokyo Olympiad". How could you not? It's more of a testament to the human spirit, frozen in moments of victory and in defeat, but it were those moments of defeat that got Ichikawa into trouble with the Japanese government. They financed the film and they wanted to see more gold medals and less slow-motion runners up so the edited the hell out of it.

Why do I bring up "Tokyo Olympiad"? Well, because I couldn't help think of it, and what the Japanese governemnt of 1965 would have thought of a film like "Tokyo OnlyPic 2008". Currently screening in Montreal at Fantasia the film is made up of various "Olympic events" created by animators like Takanobu Mizuno, Toru Hosokawa, Takashi Taniguchi, and Hiroyuki Nakao amongst many others. The Race for Love, Giant Sumo Wrestling, the Womens' Hell Marathon, all of these events can be witnessed in "OnlyPic", but of all that I've seen from the film nothing is more flat out hilarious than the 10-minute opening ceremony complete with dancing pigeons, a very sadistic take on the Olympic flame relay run and... well, don't let me spoil it for you. Check it out below while it's still on YouTube. It's comedy gold! Olympic gold that is...