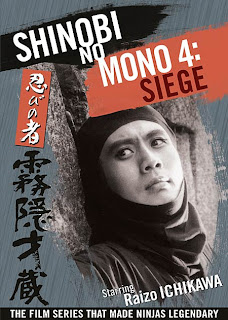 When Satsuo Yamamoto set out to make the first "Shinobi No Mono" film, he wanted to abandon the more fantastic elements of the past, and make a ninja film that represented the reality that they existed in. He gave himself a list of criteria to adhere to, and his stringent guidelines for depicting ninja in a realistic fashion paid off. The film was successful, and spawned seven sequels. He followed this same formula for the second film, but by the time it came to the third, he’d moved on to other projects, and was replaced with Kazuo Mori. And that’s when the series began to slip. The ninja elements became slightly more fantastic. They gained fantastic jumping powers, the actors obviously bouncing across trampolines. Gone was the brash realism that Yamamoto intended. And by the end of the third film, the main character Goemon has finally had his revenge on Toyotomi, although not in the fashion he’d hoped for. He slips into the shadows, never to be seen again. So just where is the fourth film to go?

Raizo Ichikawa returns for "Shinobi No Mono 4: Siege", as does a good number of the same cast from the previous films. However, they do not play the same roles. The film takes place 15 years after the third film, and Ieyasu Tokugawa has started his path to becoming Shogun of Japan. Raizo now plays Saizo Kirigakure, a ninja allied with the Toyotomi clan. Tokugawa’s army has besieged Osaka Castle , the last bastion of Hideyori Toyotomi and his family. Tomisaburo Wakayama plays legendary samurai Sanada Yukimura, who is sworn to serve the Toyotomi’s. He employs Saizo, along with several other ninja, in hopes that they can kill Ieyasu and end the siege. 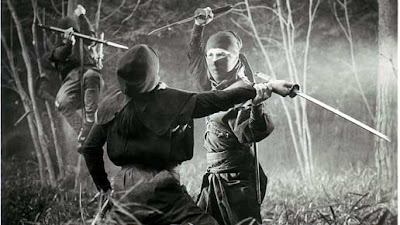 This time Tokuzo Tanaka is at the helm, who like Kazuo Mori before him, would go on to direct films in the Zatoichi series. Cinematically the film still has the same visual feel that all films in the series have had, but it still feels underwhelming when compared to Yamamoto’s first two films. Some of the ninja elements are too fantastic to fit in the real world context the films take place in. It’s a catch twenty two of sorts. While all the films so far are set in the Sengoku or Warring States era, as they progress, they seem to steep themselves more and more in the historical context, giving the folk hero ninja characters of Goemon and Saizo a hand in shaping Japanese history. But as this historic context grows throughout the films, the ninja philosophy that Yamamoto wanted to instill seems to suffer, diminishing with each passing film. Not that any of them are bad, and Shinobi No Mono 4 is no exception. Its just when compared with the first two films, especially the second, which is still my favourite, it just seems to be lacking that same sense of realism. Even the fight choreography feels forced. And because the films take place in a real historic context, much of the tension is gone from the film. We know Raizo can’t possible stop the siege and save the Toyotomi’s, because they died in that siege, just as we know he won’t kill Ieyasu because he of course goes on to become the first Shogun of Japan.

The film is still a step up from the third film, which is by the weakest of the four. This installment has a much bigger scale, and the siege warfare is quite impressive. And Raizo Ichikawa’s performance as Saizo is tantalizing, but at the same time, somewhat derivative of his performance as Goemon in the first three films, although his abilities as a ninja are different. Kirigakure means hidden mist, as he utilizes plenty of smoke bombs to distract his foes, something that is new to the series. And of course, this film boasts the acting talents of Tomisaburo Wakayama, so it can’t be all bad. Just not that great either.

Read more by Matthew Hardstaff at his blog.
Posted by Chris MaGee at 3:39 PM