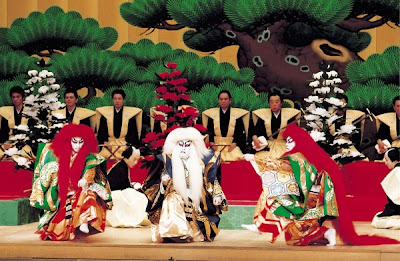 At the end of March the Toronto branch of The Japan Foundation and Marty Gross Film Productions brought three of Shochiku's Cinema Kabuki films to the city. The goal of Cinema Kabuki is to capture classic kabuki plays in high-performance HD and surround sound giving movie audiences the closest approximation of the live kabuki experience that the technology will allow, and from what I saw the folks at Shochiku have done an amazing job. Most impressive of the films/ plays I saw in March was the Yoji Yamada adapted and directed "The Sentimental Plasterer" based on a rakugo story by San'yutei Encho and starring several generations of the prestigious Nakamura family in various roles. (Read my full review here.)

I enjoyed myself so much at these screenings that I was excited to see a trailer for yet another Yoji Yamada directed Cinema Kabuki film posted over at Jason Gray's blog. Titled "Renjishi/Rakuda" the play tells the story of a father lion who pushes his two cubs out of the den and off a cliff (!) and then takes back in the cub who crawls back up the cliff to home. Talk about macho subject matter! This film/ play looks a lot more stylized and mannered than "The Sentimental Plasterer", but no less fascinating. Here's hoping that The Japan Foundation will host more Cinema Kabuki screenings and that this will be amongst those. Check out the full trailer below.