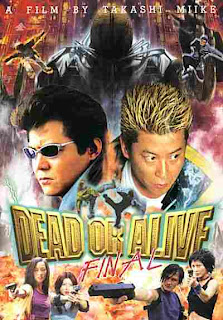 "Dead or Alive: Final" is the third and (obviously) final film in Takashi Miike’s trilogy that began with 1999’s "Dead or Alive (Hanzaisha)" and continued in 2000 with "Dead or Alive 2: Birds". While all three films star Riki Takeuchi and Sho Aikawa and share certain thematic and stylistic similarities, they are virtually self-contained in terms of story and character. For example, this latest entry continues the series’ use of yakuza elements, but throws a healthy dose of science fiction into the mix by situating its events in a dystopic Yokohama in the year 2346. The city is ruled by the despotic Mayor Wu who controls the population with a Prozac-laced birth control drug and employs Takeuchi’s Honda as his right-hand man (early in the film, the two have a rooftop meeting that echoes Aikawa’s rooftop meeting with the police chief in the first "Dead or Alive"). They try to suppress a band of resistance fighters who are eventually joined by Aikawa’s lone wolf android Ryo.

"Dead or Alive: Final" has more than a few things in common with "Blade Runner", among them the massive, advertisement-covered blimp that hovers over the city and glimpses of crowded markets and towering, dirty buildings. The biggest one, though, is surely the inclusion of androids modeled as humans (even referred to as replicants!) whose existence as such is unbeknownst to many – and in some cases, even themselves. But despite these overt references to Ridley Scott’s film, Miike’s distinct, energetic, wildcard sensibility ultimately runs the show from beginning to end, and the futuristic setting for the most part simply enables more room for his delightfully off-kilter imagination to assert itself. CGI, slow motion and fast motion are all frequently used for the many extraordinary feats featured throughout the film, among them a handful of bullet-time sequences that will surely remind many of the famous original from "The Matrix". 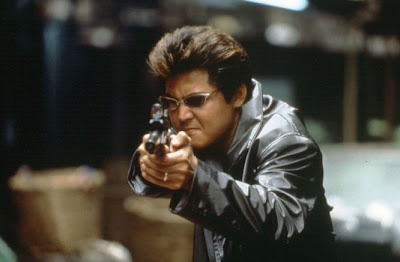 As usual, Miike turns out to have quite a few stylistic tricks up his sleeve in "Dead or Alive: Final". The opening sequence, which could very well be an homage to Ingmar Bergman’s "Persona", shows a film projector starting up and scenes from old black-and-white films filled with cheesy special effects. Like its predecessors, Final often bears a hazy yellow tinge that so vividly suggests a world drenched in stifling heat. Other elements carried over from the previous films include a familiar story structure surrounding warring factions, the more direct one-on-one rivalry between Takeuchi and Aikawa and the truly bizarre, logic-defying ending that comes close to topping that of the first film. Also, Miike once more takes some time to explore deeper things than strange spectacles and guys shooting guns at each other. Specifically, he returns to the theme of friendship through the two small boys who get caught in the middle of the turbulent conflict and form a bond represented by the strips of film that they keep as mementoes of each other. Such material is handled quite well and nice to see in-between the scenes of battle and bloodshed, but unfortunately Miike doesn’t go as deep as he so effectively did in the previous "Dead or Alive" films.

Overall, "Dead or Alive: Final" lives up to the expectations many familiar with Miike’s idiosyncratic series will bring to it, making sure to include lots of chaotic action, nutty humor and, of course, effortless cool brought in spades by Takeuchi and Aikawa. Either one of them is certainly worth rooting for as they face off one last time. My personal favorite of the two is definitely Aikawa, his continually unfazed, laid-back attitude paving the way for one priceless scene after another (such as when Ryo nonchalantly brushes his teeth as a mutinous scuffle unfolds before him – shortly before he single-handedly puts an end to it himself). "Dead or Alive: Final" may not be quite as good as its predecessors, but it features plenty of what makes them so giddily appealing – including Miike, Takeuchi and Aikawa letting loose and doing what they each do best, which alone should provide more than enough incentive to seek out this fitting final entry in a great series.

Read more by Marc Saint-Cyr at his blog.
Posted by Chris MaGee at 5:49 PM