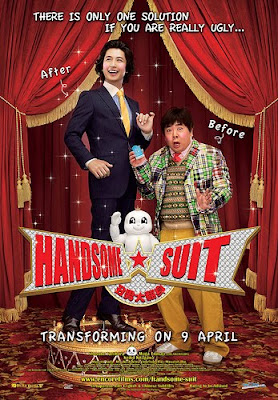 Takuro (Muga Tsukaji) is the owner/chef of the neighborhood diner. He's a sweet enough guy, but he's short, chubby, and more than a little porcine in appearance. He absentmindedly picks his nose in public, and involuntarily spits out beverages when surprised or amused. Schoolgirls openly laugh at him; strangers point and jeer. So when adorable Hiroko (Keiko Kitagawa) walks in, no one is as shocked as Takuro when she seems immune to his, er, charmlessness. However, formula dictates that the two of them must not fall in love immediately, so when Hiroko disappears, Takuro becomes desperate enough to try the latest and greatest in sartorial technology: the Handsome Suit, a kind of Mr. Stay Puft marshmallow man suit that morphs you, head to toe, into a different man. When Takuro wears the suit, he changes into the dapper and svelte Kyonin (Shosuke Tanihara). Kind of--well, exactly!--like "The Nutty Professor". 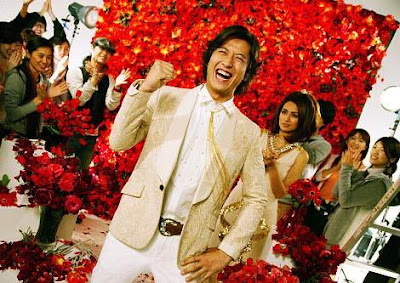 There couldn't be a greater disparity in their lifestyles. Kyonin is so handsome that when he spits his beverage in someone's face, it's charming. When a jostling train leads to Takuro bumping into a woman, she yells and calls him names; when Kyonin bumps into a woman on the train, she bats her eyelashes and hopes it wasn't an accident. When he's discovered by a fashion designer and dropped into a photo shoot he promptly becomes a superstar heartthrob. He even starts dating the hottest female model around, the gorgeous Raika (Mayumi Sada). Life couldn't be better for Takuro-as-Kyonin, but it's not real--it's all a by-product of wearing the Handsome Suit.. In his hours as loser Takuro, he's hired a new waitress: Hone (Miyuki Oshima). Hone is sweet, fun, good-natured, and... plain. Chubby, bespectacled and fashion-backward, she's the opposite of sexy Raika, but Takuro can be himself with her and they have fun, oblivious to their social status. So the stage is set for Takuro to make a choice: Is it better to be a handsome, rich, popular phony, or to be his ugly, boorish, fat self?

There's never much doubt as to how things will work out, but there never is in these movies; It's about the journey, not the destination.. "Handsome Suit" has some inspired visuals, a quick pace, and plenty of laughs. First-time film director Tsutomu Hanabusa adapts SMAP writer Osamu Suzuki's not-really-original novel into a slick commercial film that hits all the right notes on it's way to a happy climax. There are very few surprises, and actors like Hiroyuki Ikeuchi and Manami Honjou are wasted on throwaway roles, but "Handsome Suit" is delirious formulaic fun--especially if your expectations are appropriately low.
Posted by Marc Saint-Cyr at 11:00 AM