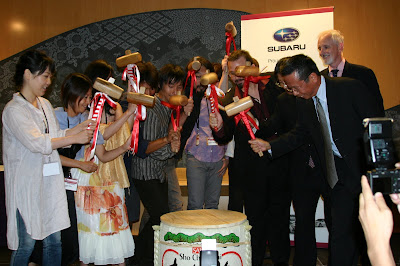 by Chris MaGee
Well, it's been about four months of solid work, about five trillion emails, and several pints of blood sweat and tears, but finally the Shinsedai Cinema Festival kicked off last night here at the Japanese Canadian Cultural Centre here in Toronto. All our guests were onhand: "Now, I..." director Yasutomo Chikuma, the crew of indie mystery/ thriller "Thunderfish", director Touru Hano, cinematographer Tetsuhiro Kato, and lead actress Junko Kimoto, "Vortex and Others" director Yoshihiro Ito, artist and animator Akino Kondoh, and "Peaches!" organizer and producer Atsuko Ohno. Of course I was there along Shinsedai co-programmer Jasper Sharp, JCCC Executive Director James Heron and the Vice Consul General of Japan and the CEO of Subaru Canada. Sake flowed at the traditional cask breaking ceremony and both Japser and myself were really surprised and fascinated by Subrau CEO Yokoyama-san's stories of going to the orginal ATG, Art Theater Guild, theatre in Tokyo as a teenager and soaking up indie films not only from Japan but from around the globe. His short speech nailed precisely what Shinsedai is about: finding and fostering new film talent from Japan.
Above and beyond the ceremonies and sake Shinsedai has laready been a place for the guest filmmakers to mix and mingle with Toronto film fans and each other, and we can only hope that we'll see some new projects come out of everyone being here in the city. It seems that Hano's "Thunderfish" and Ito's "Vortex and Others" are the films creating the most buzz, so it'll be interesting to see what goes down at the Q&A's for both of them.
Another great part of the fest is that the entire Pow-Wow crew, including our U.S. correspendent Eric Evans, are all together and helping out to make sure things are running smoothly and mostly on time.

So, rushing is the name of the game at any fest and that means I have to rush off to introduce the "Peaches! Programme", but check back over the weekend for more inside scoops on Shinsedai.
Posted by Chris MaGee at 9:49 AM

I'm so glad for the good news. I wish I could have made it to the festival! I've only heard good things from my writers and can't wait to hear more.

Thank you for posting this!