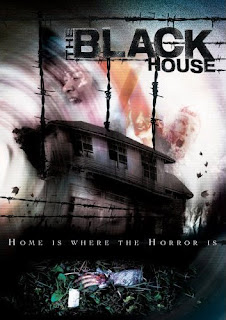 Yoshimitsu Morita’s “The Black House” is an unusual piece of work: a contemporary Japanese horror film completely devoid of clichéd ghosts and paranormal activity and, for a healthy chunk of its running time, doesn’t even feel very much like a typical horror film, though it certainly compensates later on. Its protagonist, Wakatsuki (Masaaki Uchino), is the sheepish manager of the Showa Life Insurance company. He and his coworkers (one of whom played by Miike veteran Renji Ishibashi) constantly have to confront a wide array of conniving scammers who will resort to the lowest means to receive insurance payouts – including one man who fakes a new ailment every time his hospital coverage expires! So it seems like business as usual when Wakatsuki has a nervous phone conversation with a spacey woman who asks him if her insurance policy will pay out if she commits suicide. He pays a visit to her home where he meets her mentally unbalanced husband Shigenori Komoda (Masahiko Nishimura) and, a short while later, discovers the hanging body of their son. From that point on, the man and woman keep appearing at Wakatsuki’s company (separately), far from fazed by the child’s death and persistently asking (or, in the husband’s case, pathetically pleading) point-blank for the money from their policy while all Wakatsuki can do is politely tell them to wait until the head office concludes its investigation in the matter. If the circumstances surrounding the boy’s death alone weren’t suspicious enough, new information crops up surrounding Mr. Komoda’s history with a group of finger-severing benefits collectors, the murder of a girl who was in the same class as the couple and the fate of Mrs. Komoda’s first husband (with whom she originally had her son and who was also covered by an insurance plan). Wakatsuki soon becomes worried about whether a similar crime will happen again, especially considering how both the husband and wife are also covered by an insurance policy. 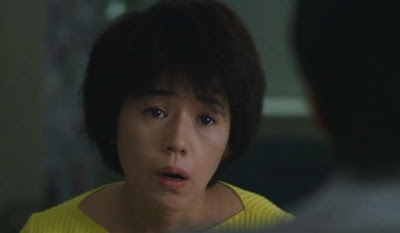 This intriguing plot sets the stage for a truly memorable character: the kooky, bowling ball-tossing, mop-headed, yellow-clad Sachiko Komoda portrayed by Shinobu Ôtake. From the moment she first appears, she inspires one feeling after another: first amusement from her detatched manner, then annoyance and contempt for the way she comes to collect the money from the company with an air of entitlement and little effort put into actually making it seem as if the multiple tragedies that fall upon her family are genuine, followed by fear from her increasingly threatening stratagems and manipulations against Wakatsuki. At first the film positions the shifty Shigenori as the prime suspect in the family’s dangerous schemes (reinforced by the disturbing and sporadic buzz-saw effect that intrudes on the soundtrack whenever he is present), but soon enough all the signs point squarely in a different direction.

A noticeable feature of “The Black House” is the inconsistency of its overall tone. Unlike most horror films, tension doesn’t build up gradually, but instead is delivered in short, abrupt bursts amid distinctly different scenes like the light, almost peppy meetings with the insurance agents set to jazzy music and discussions about dreams and various psychological conditions (including one bafflingly set in a strip club). Events and storylines progress, but the film’s style doesn’t really feel in synch with them – at least, not until roughly the last quarter, when it finally settles into its paranoid horror-thriller groove.

Based on a novel by Yûsuke Kishi, “The Black House” is commendable for the way in which it makes a solid psychological horror film out of a real-life phenomenon of Japanese society involving its craftier impoverished citizens. It is an interesting if imperfect flick with a good amount of twists and turns – not all of which being completely unpredictable, but there are enough that keep you guessing all the same. “The Black House” knowingly mines the horror genre for recognizable traits such as knife-wielding maniacs and last-minute scares, not using them in any mind-blowingly new or postmodern ways, but instead reminding us what makes them so appealing and entertaining in the first place.

Read more by Marc Saint-Cyr at his blog.
Posted by Chris MaGee at 6:19 PM