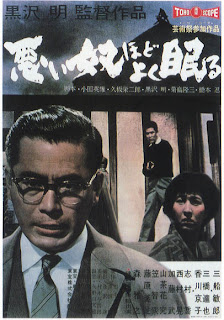 Of Akira Kurosawa’s three loose takes on classic Shakespeare plays, “The Bad Sleep Well” is the odd one out. Both 1957’s “Throne of Blood,” his interpretation of “Macbeth,” and 1985’s “Ran,” which borrows and modifies elements from “King Lear,” are majestic, large-scale tapestries of Japan’s feudal era while his 1960 approach to “Hamlet” is firmly situated in the then present day world of postwar Tokyo. As its great tile so clearly suggests, the film is just as influenced by film noir as the Bard’s drama, presenting a gripping tale of slick facades and shady goings-on behind closed doors and in the middle of the night.

It opens on a wedding ceremony for the marriage of Koichi Nishi (a bespectacled Toshirô Mifune) to the daughter of Iwabuchi, vice president of the prestigious Public Corporation. Hanging like a shadow over the occasion are suspicions of corruption regarding Public Corp.’s recent dealings with Dairyu Construction, reinforced by the suicide of one of the former’s employees five years previous. Soon enough, the investigation into spent public funds and rigged bids triggers a fresh string of strange suicides that are in fact devised to rid Public Corp. of its incriminating middlemen. However, their sketchy dealings are hindered by Nishi, who oversees a careful plan of revenge fueled by long-simmering anger. 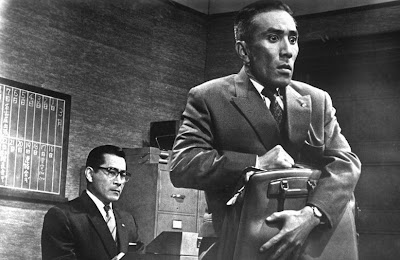 In Alex Cox’s “The Last Emperor,” his documentary ode to Kurosawa, Francis Ford Coppola claims that the first forty minutes of “The Bad Sleep Well” “are as good as anything [that has] ever been made.” This is a fair statement, as the film features in abundance the filmmaker’s legendary storytelling talents. The action that takes place during the wedding is shown from the perspective of a group of curious journalists who provide context by skeptically discussing the wave of scandal that has hit Public Corp. and pointing out the assembled guilty parties. The event’s building tension, helped along by its stiff formality and the bride’s brother who, in his toast, outright threatens to kill the groom if he mistreats her, culminates with the surprise arrival of a massive cake shaped like the corporation’s ministry building with a rose sticking out of the seventh floor window from which the employee jumped. From there, Kurosawa hurls us into a montage of newspaper headlines, economically covering the investigation of Public Corp. with a clever handling of time and film technique. Wada (Kamatari Fujiwara), the assistant chief of contracts, is grilled by detectives, then pushed by the company towards suicide, but before he can complete the deed from the top of a tall, smoldering hill, Nishi stops him and recruits him as a “ghost” to torment the remaining villains. That’s when the film shifts from the smooth forty-ish minute-long exposition so favored by Mr. Coppola to a compelling revenge thriller driven by Mifune’s contained intensity.

As he often does in his films, Kurosawa keeps from clearly defining his characters as either good or evil, opting instead for a more complex consideration of human morality. For the most part, Iwabuchi (Masayuki Mori) and his right-hand man Moriyama (Takashi Shimura) are pretty despicable, but a family barbecue scene makes the scheming vice president out to be almost harmless. In one powerful scene, Nishi describes the driving force behind his craving for revenge and the emotional extremes he pushes himself towards, sometimes even reluctantly, in order to maintain it. An especially intriguing facet of the plot involves Nishi’s wife, Yoshiko (Kyôko Kagawa), her own place in his plans and how it affects their constantly evolving relationship. Kurosawa also once more shows he isn’t afraid to express his pessimistic view of the world and the rotten puppet masters who, however undeservingly, truly control it, not only finding ethical fault with Nishi’s actions, but also pitting him against increasingly grim odds.

Though it is firmly situated within a productive period in Kurosawa’s career, “The Bad Sleep Well” remains somewhat overshadowed by more widely recognized Mifune collaborations like “The Hidden Fortress,” “Yojimbo” and “High and Low.” But if its harrowing suspense, impressive performances and cutting-edge depiction of corporate greed are any indication, it truly deserves a place alongside the filmmaker’s best.

Read more by Marc Saint-Cyr at his blog.
Posted by Chris MaGee at 6:45 AM