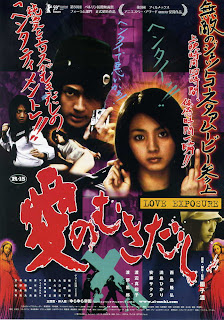 Since aspects of this film are so unusual, let's start with a quick FAQ based on the questions I've been asked about the film.

Is "Love Exposure" really four hours long? Yes, but you'd never know it from the viewing experience. The showing I attended had an intermission at the halfway point, and when the screen went dark and the lights came up marking the 2-hour point, the audience was confused--it felt as if about 25 minutes had passed, and this so-called marathon film was half over.

No, really--4 hours?? Yes, but seriously, it's a well-paced movie. You won't notice.

For real? That's longer than "Gandhi". Yes, an hour or so longer. Moving on…

Much of the talk about the film has centered on its running length, but it's not an issue: "Love Exposure" is that rare movie that you can't imagine cutting. There's no dead wood, no dull moments--and more importantly, no false moments. I went in both intrigued and skeptical. I'd seen "Jisatsu Sâkaru" ("Suicide Club", 2001) and "Exte: Hair Extensions" (2007) and while both were serviceable, well-made films, I didn't see the potential in them for their writer/director Sion Sono to craft a 4-hour anything, let alone an epic story about love, religion, and sexuality. No mistake, this is an evolutionary leap for him: "Love Exposure" jumps genres so seamlessly, tells a sprawling story so nimbly, that it's just not possible for Sono to go back to standard cookie-cutter filmmaking. 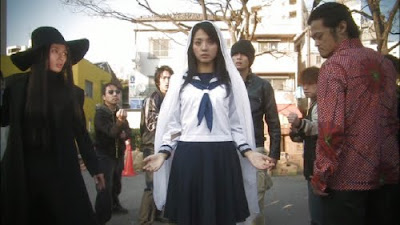 It's an audacious choice, a 4-hour movie. Such a choice demands much of everyone at every stage of the film's life, from pre-production to popcorn-eater. To further complicate matters, there's no huge arc in either time or location. In, say, an Edward Zwick-style epic or something like "Benjamin Button", you might see a character age 30 years and travel halfway around the world. Sono focuses on a relatively short timespan of a handful of years, keeping the story focused on a love triangle of sorts between three teenagers: Yu (Takahiro Nishijima) is the son of devout Catholics who loses his mother at a young age and grows up in and around the church; Yoko (Hikari Mitsushima) is the new girl who shows up at school with unexpected ties to Yu's family, but immediately wins his heart; Kioke (Sakura Ando) is the mysterious girl who's always on the periphery of Yu's life, observing and calculating her next move.

If it seems like I'm being deliberately cagey about the details I apologize, but "Love Exposure" is one of those films that needs to unfold in front of you. Seeing the story morph from theme to theme--coming-of-age to underdog to teen romance to transvestite hijinx to high drama to revenge tale to resolution of sorts--well, it's been a month since the showing and I still can't think of any sngle film with which to compare it. After the screening a few of us sat around trying to create a frame of reference, and the following films were all mentioned with nods of assent: "Graveyard of Honor", "Karate Kid", "The Shining", "Sixteen Candles", "One Flew Over The Cuckoo's Nest", "Arlington Road", "The Graduate"… I mean, what does that say about this movie? Sono manages to throw in everything but the kitchen sink, but does it all well. In lesser or less ambitious hands "Love Exposure" would have made an above-average comedy OR drama, and in places borders on psychological horror. The tonal shifts never feel forced or false. By rights it should be a mess, but it's amazing.

Even more impressive than the genre-hopping is how much Sono trusts his young cast. In many of the more dramatic scenes he favors long uninterrupted shots, so the three young principals do some heavy lifting. Nishijima's Yu is soulful and sincere, and experiences a rollercoaster emotional journey that rings true start to finish--no small task for a young actor who'd previously just done some limited TV work. Likewise, Mitsushima creates a Yoko that immediately seems real and believable, despite the character's trials; she plays tough, vulnerable, numb, and frantic equally well. However it's relative newcomer Sakura Ando that's the real revelation. In as deft and effortless a performance as I've seen all year, Ando steals every scene she's in; Her Kioke is maddening and alluring and terrifying, often all at once. The character as its written would be the weak link in the story, the one element that seems writerly or somehow artificial, without such presence in the role. She's both victim and villain, damaged child and devious mastermind. Western films so rarely give women roles like that of Kioke (or the vaguely similar Sumika in "Funuke Show Some Love You Losers"). Ando's Kioke is a force of nature; another festival goer likened the part to that of Don Logan in Jonathan Glazer's "Sexy Beast", adding "But if Ben Kingsley was, like, much smarter. And a cute Japanese girl." Ando's got cinema in her blood: her father is actor/director Eiji Okuda and her sister is director Momoko Ando, whose feature "Kakera" has been dazzling festival audiences. She's for real.

So Sono can't quite go back, but where can he go? What's left after a coming-of age, cross-dressing, love-story psycho-melodrama that examines the complicated interrelationships between sexuality and religion--with laughs? Judging from how successfully Sono handled the various parts of the film, he could do anything. Raindance Film Festival calls Sono's movie "THE Japanese film of the year", and I'm inclined to agree.
Posted by Chris MaGee at 4:00 PM